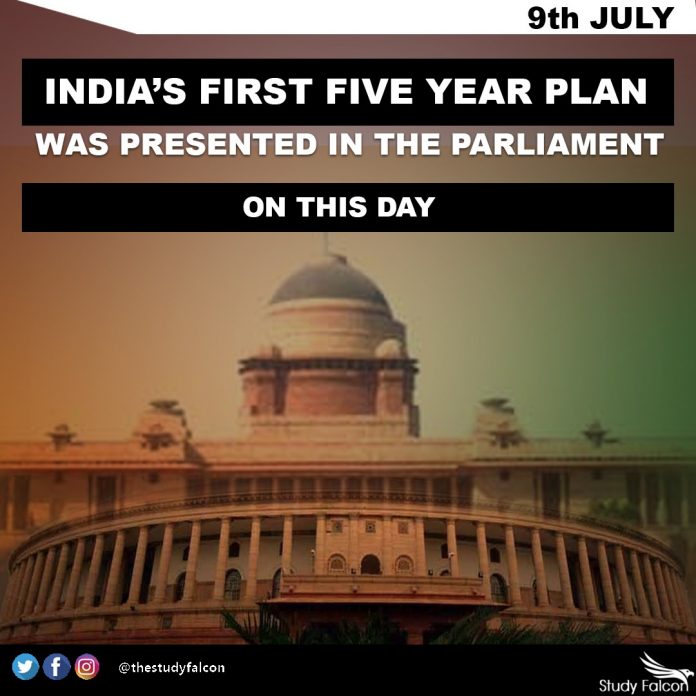 • On 9 July 1951, India’s first Prime Minister Jawaharlal Nehru presented the First Five-Year Plan to the Parliament.
• Five-Year Plans (FYPs) are centralized and integrated national economic programs.
• Five-Year Plans were a formal model of planning adopted by the Indian government after Independence, for effective and balanced utilisation of resources.
• They were formulated by the Planning Commission of India, which was established on 15 March 1950.
• Since it was not a constitutional body, the Commission reported directly to the Prime Minister and its first Chairman was Nehru himself.
• Joseph Stalin implemented the first Five-Year Plan in the Soviet Union in 1928. Most communist states and several capitalist countries subsequently have adopted them.
• The First Five-Year Plan was based on the Harrod–Domar model with few modifications and was developed by K.N Raj.
• The plan suggested that growth was dependent on two things. First, a high level of savings since higher savings enabled greater investment and second, a low capital-output ratio that ensured efficient investment and a higher growth rate.
• It focused primarily on the development of the primary sector, specifically agriculture and irrigation.
• The plan had a target of 2.1 per cent GDP growth for the fiscal year, however, it ended up recording a growth rate of 3.6 per cent that year.
• Five-Year Plans were focused on making India self-sufficient, enabled industrial growth and ensured that development went beyond the urban areas and reached the interior parts of the country.