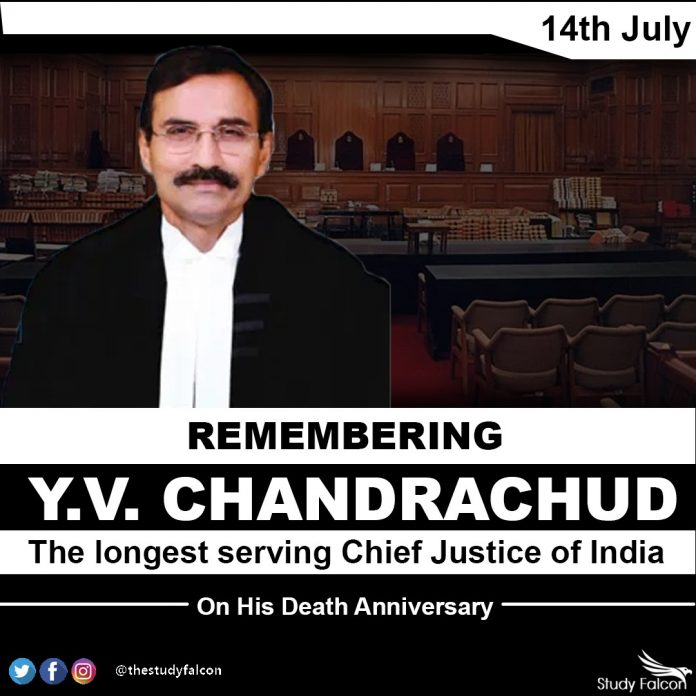 • The day marks the death anniversary of former Chief Justice of India, Hon’ble Justice Y.V. Chandrachud.
• Yeshwant Vishnu Chandrachud was the 16th Chief Justice of India, serving from 22 February 1978 to 11 July 1985.
• Chandrachud was educated at Nutan Marathi Vidyalaya high school, Elphinstone College and the ILS Law College, Pune.
• Yeshwant was also one of the earliest LLM graduates at Bombay University.
• Chandrachud was first appointed Judge to the Supreme Court of India on 28 August 1972 and is the longest-serving Chief Justice in India’s history at 7 years and 4 months.
• Chandrachud’s nickname was Iron hands after his well-regarded unwillingness to let anything slip past him.
• Yeshwant enrolled as an advocate in the High Court of Bombay in 1943 and was a part-time professor of law in Government Law College, Bombay, from 1949 to 1952.
• Justice Chandrachud was appointed Chief Justice of India during the term of the Janata government, under Prime Minister Morarji Desai.
• During Chandrachud’s tenure as Chief Justice, he sent Sanjay Gandhi to jail in the “KissaKursiKa” case.
• Chandrachud became a strong opponent of the Indira government and was known for staunchly defending the independence of the judiciary.
• Some of the most notable cases in Judicial history such as the Habeas Corpus Case, Minerva Mills Case and Shah Bano Case occurred during his tenure.
• Y.V. Chanrachud’s son Hon’ble Justice D.Y. Chandrachud is currently acting as Judge in the Supreme Court of India.