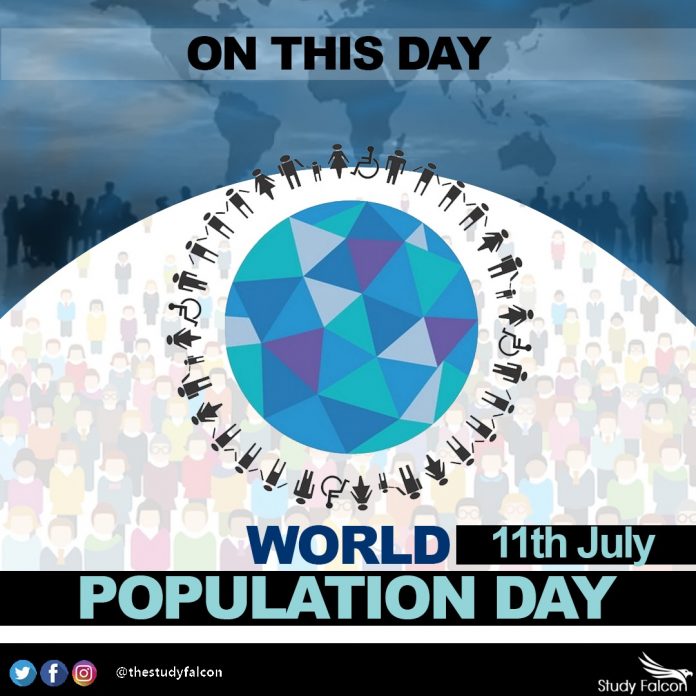 • World Population Day is an annual event to raise awareness of global population issues.
• The day is observed on 11 July every year since first observed on 11 July 1990.
• Observation of World Population Day was established by the Governing Council of the United Nations Development Programme in 1989.
• The day was inspired by the public interest when the world’s population reached Five Billion on the day July 11, 1987.
• United Nations General Assembly’s resolution 45/216 made the day official in December 1990.
• World Population day was suggested by Dr K. C. Zachariah, who was then working as Sr. Demographer at World Bank.
• Zachariah suggested that efforts have to be made to spread awareness on population rise, as the world is already at five billion people.
• It took hundreds of thousands of years for the world population to grow to 1 billion, then in just another 200 years or so, it grew sevenfold.
• In 2011, the global population reached the 7 billion mark, and today, it stands at about 7.7 billion, and it’s expected to grow to around 8.5 billion in 2030, 9.7 billion in 2050, and 10.9 billion in 2100.
• 2007 was the first year in which more people lived in urban areas than in rural areas, and by 2050 about 66 per cent of the world population will be living in cities.
• World Population Day 2021 theme would focus on the global population issues relating to the impact of coronavirus on human health.