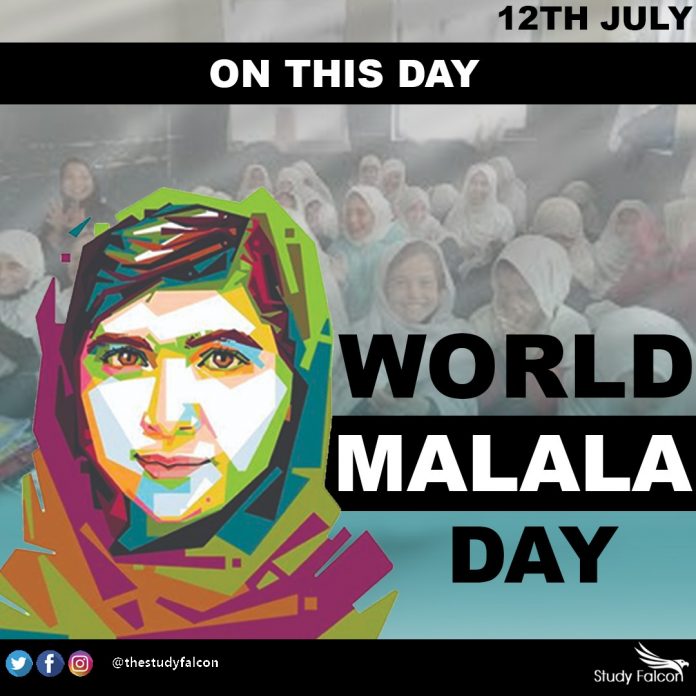 • Every 12 July is a UN observance called “Malala Day.”
• The day is celebrated to honour the life and struggles of Malala Yousafzai of Pakistan.
• On October 19, 2012, Malala was 15 years old on a school bus home when she was targeted by the Taliban and shot in the head.
• Malala survived and has since gone on to be an advocate for the rights of girls and women all over the world.
• On 15 October 2012, UN Special Envoy for Global Education, Gordon Brown, visited Yousafzai while she was in the hospital, and launched a petition in her name and “in support of what Malala fought for”.
• On July 12, 2013, Malala, a sixteen-year-old, delivered a speech at the United Nations headquarters on the need for gender equality in education.
• It was Malala’s first public speech since the attack, leading the first-ever Youth Takeover of the UN, with an audience of over 500 young education advocates from around the world.
• The address received great applause and July 12, which is also her birthday, was soon declared by the UN as Malala Day.
• In 2012, the Pakistan government awarded her the first National Youth Peace Prize.
• In 2014, at the age of 17, Malala became the youngest-ever recipient of the Nobel Peace Prize.
• Malala’s current campaign calls for governments to provide 12 years of free, safe, quality education for every girl.
• Malala has argued that if governments stopped spending money on the military for just 8 days, they would have the 39 billion needed to provide the 12 years of free education to every child in the world.