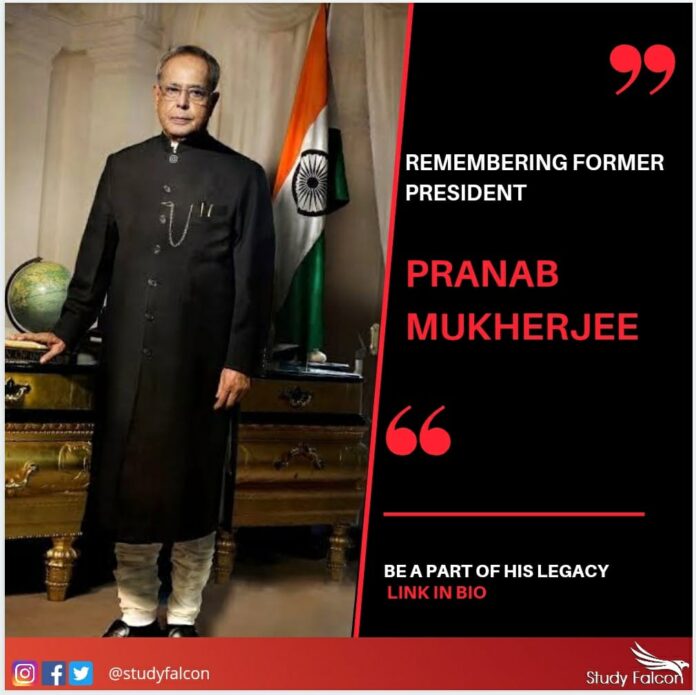 Former President and Congress stalwart, Pranab Mukherjee has passed away after undergoing treatment for nearly three weeks. Earlier today, the hospital issued a statement saying that the former President’s health had worsened and he was in septic shock due to lung infection.

Pranab Mukherjee, in full Shri Pranab Kumar Mukherjee, (born December 11, 1935, Mirati, Bengal, Indian politician and government official who served as president of India (2012–17). Mukherjee’s father, Kamada Kinkar Mukherjee, was deeply involved in India’s struggle for independence from Great Britain in the first half of the 20th century. A longtime member of the Indian National Congress (Congress Party), the elder Mukherjee spent several years in prison as a result of his activities opposing British rule and, after Indian independence, held a seat in the state legislature of West Bengal (1952–64). Pranab was educated at the Suri Vidyasagar College and he later earned an advanced degree in history and political science as well as a law degree from the university. In 1963 he accepted a teaching position at a small college near Calcutta that was associated with the university. He also became editor of a Bengali-language monthly periodical and, later, worked for a weekly publication.

In the year 1969, Mukherjee entered politics and managed the election campaign of V.K. Krishna Menon, an independent candidate. Mukherjee first ran for public office in 1969, when he won a seat in the Rajya Sabha (upper house) of the Indian parliament as a member of the Bangla Congress, which soon merged with the Congress Party. He served an additional four terms, although he left that chamber in 2004 and contested and won a seat in the Lok Sabha (lower house). In 1969, Indira Gandhi helped him to become a member of Rajya Sabha. In 1975, 1981, 1993 and 1999, he was re-elected to the Rajya Sabha.

Early on in his career in the legislature, Mukherjee became a protégé of Indira Gandhi, prime minister of India in 1966–77 and 1980–84. Under her tutelage, he began in 1973 to fill administrative positions of increasing responsibility in the cabinet, and in 1982 he was named to the important post of minister of finance.

After the assassination of Indira Gandhi in 1984, he was sidelined from the Congress under the leadership of Rajiv Gandhi. In 1991, after the assassination of Rajiv Gandhi, the then Prime Minister, PV Narasimha Rao appointed Muukherje as the Deputy Chairman of the Indian planning commission. From 1995-1996, Mukherjee served as the External Affairs Minister in Narasimha Rao’s cabinet.

Following the assassination of Gandhi in 1984, however, Mukherjee had a falling out with Rajiv Gandhi, her son and successor (1984–89) as prime minister, and was relegated to the political backwater. He subsequently left the Congress Party in 1986 and by early 1987 had formed his own small political party. By 1989, however, the two men had been reconciled, and Mukherjee had merged his group back into Congress.

In 2004, he became the leader of Lok Sabha. Before Manmohan Singh was appointed as the Prime Minister, it was speculated that Mukherjee would go on to occupy the office of PM. From 2004, he went on to head three crucial ministries— external affairs, defence and finance—and became the first occupant of the Rashtrapati Bhavan to have this distinction.

Between, 2004-12, he had chaired 95 GOMs. That is why friends and rivals will agree that there was enough politics left in him when he accepted his retirement from active politics in the form of the presidency.

Known as “man for all seasons,” Mukherjee played a crucial role in getting through the controversial Indo-US nuclear deal – 123 Agreement — and earning an exemption for India from the Nuclear Suppliers Group. He was considered a walking encyclopaedia on virtually everything related to politics and governance which made it difficult for any bureaucrat to hoodwink or trip him. He will always be remembered for his remarkable service towards his country and his unmatchable knowledge.