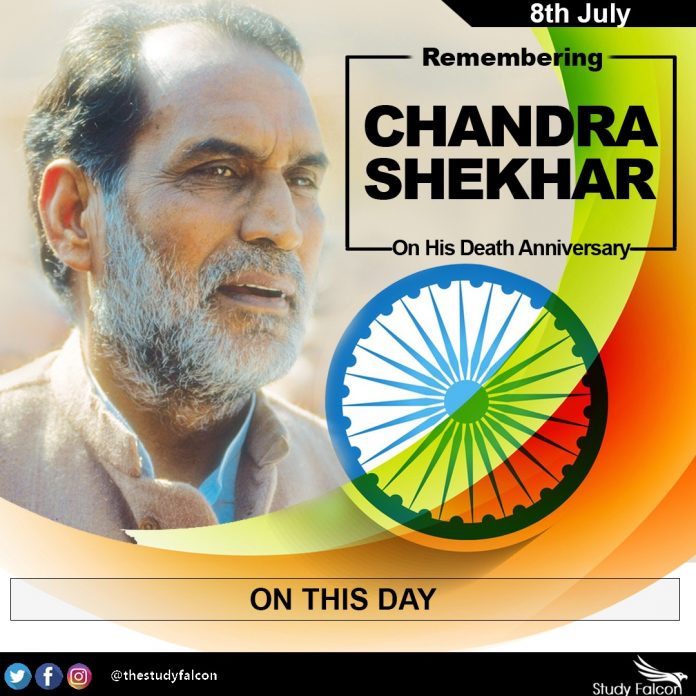 • Chandra Shekhar Singh was an Indian politician who served as the eighth Prime Minister of India, between 10 November 1990 and 21 June 1991.
• He headed a minority government of a breakaway faction of the Janata Dal with outside support from the Indian National Congress.
• He was the first Indian Prime Minister who has never held any Government office
• Chandra Shekhar was attracted to politics from his student days and was known as a fire-brand idealist with revolutionary fervour.
• He was elected Secretary of the District Praja Socialist Party, Ballia. In 1955-56 he took over as General Secretary of the U.P., State Praja Socialist Party.
• As a Member of Parliament, he made a mark by taking a keen interest in espousing the cause of the downtrodden and pleading for policies for rapid social change.
• He came to be a ‘Young Turk’ leader for his conviction, courage and integrity in the fight against vested interests.
• He founded and edited YOUNG INDIAN, a weekly published from Delhi in 1969. Its editorial had the distinction of being among the most quoted ones of the time.
• When Emergency was declared on June 25, 1975, he was arrested under the Maintenance of Internal Security Act.
• His diary, written in Hindi while undergoing imprisonment during the Emergency period, was later published under the title ‘Meri Jail Diary’.
• He has established about fifteen Bharat YatraCentres in various parts of the country to train social and political workers for mass education and grassroots work in backward pockets of the country.
• Chandra Shekhar was prime minister for seven months, the second shortest period after that of Charan Singh.
• However, his government could not introduce a full budget because on 6 March 1991 Congress withdrew support during its formulation.
• As a result, Chandra Shekhar resigned from the office of the prime minister on the same day.