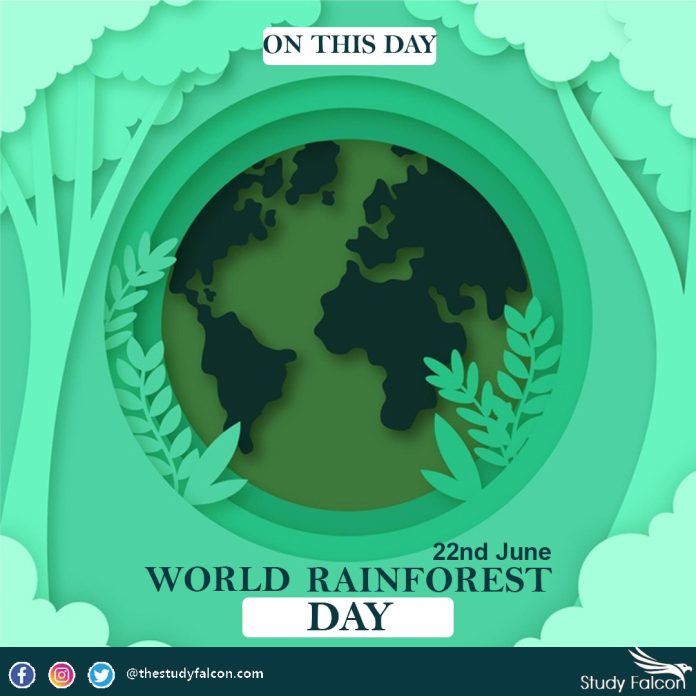 • Every year, June 22 is observed as World Rainforest Day.
• This day has been set aside to help protect rainforests and raise awareness and encourage action among the masses to protect them.
• The first-ever World Rainforest Day was observed on June 22, 2017. It was established by a collaboration of groups, called the Rainforest Partnership.
• Rainforest Partnership was founded in 2007 by Niyanta Spelman, Hazel Barbour, Jordan Erdos, and Bob Warneke, facilitated by Beth Caplan.
• The international non-profit organization is based in Austin, Texas and it is dedicated to protect and regenerate tropical rainforests through community-based projects in the Amazon.
• Organizers of World Rainforest Day say that 20% of the oxygen that we breathe and the freshwater that we drink is attributed to rainforests of the Amazon.
• Rainforests absorb carbon dioxide, stabilize climate patterns, and are home to half the world’s animal species and plants.
• The concern of this annual day’s organizers is that an area as large as the size of 40 football fields is lost every minute of every day, according to them.
• Deforestation causes 15% of global carbon dioxide emissions that accelerate climate change,more than from all cars in the U.S. and China combined.
• Natural climate solutions like protecting and restoring forests, however, could reverse global emissions by a third.
• The theme for the year 2021 is “PROTECTED TOGETHER NOW FOREVER”.