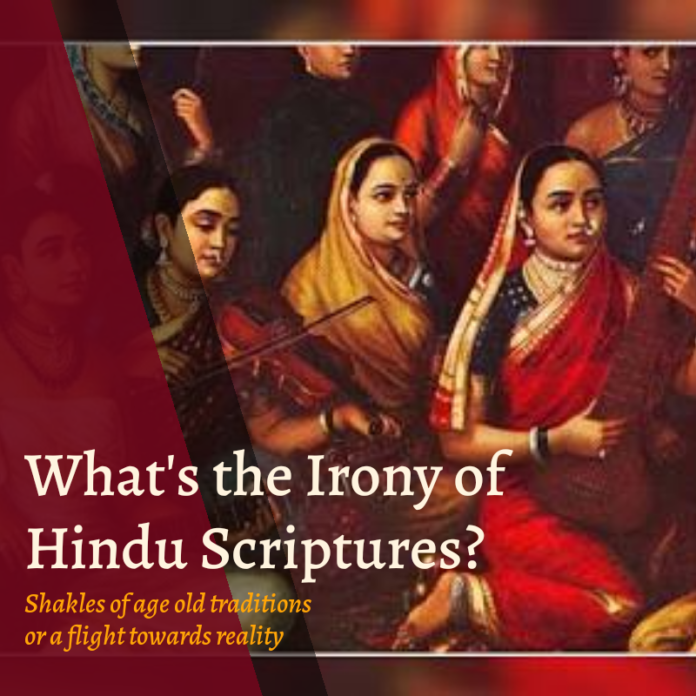 Hindu society has set women on high a pedestal by establishing them as Goddesses.  But the irony is, that status of women in the society is contrary to this. Various Hindu texts are accused of degrading women which is not wholly true. Hindu texts consist mainly of the Vedas, Upanishads, Puranas, Shruti and Smriti. These texts consists of mostly everything one can think of spirituality, transmigration, rituals, social – political law and order. Among all these concepts essential for leading a complete and peaceful fulfilling life laws were laid out so that no disruption would happen , but why were women bounded here . Is it essential to control women of the society to lead a peaceful life? Yes, according to ancient Hindu scriptures. Navigating the life of humans towards a higher cause has always been significant in Hindu tradition. There are different set of laws for every section of the society. But laws governing women were rigid and deeply rooted. These laws are so profound that they found their way into 21st century. It is astonishing yet highly practiced, these laws have shaped how we see woman today.

Women have been portrayed in very conflicting light in various epics and scriptures.

Like in Ramayana, Sita the wife of God Ram is portrayed as docile and submissive. Proved by two incidents which have contradictory interpretations. Firstly, Agni Pariksha literally meaning Fire Test . Where Sita was asked to walk through a pit of fire in order to prove her chastity after being abducted by Ravana. Some critics say that Sita opposed this act and was furious. Some also claim that some verses in the Ramayana were added later and were not part of the original text. Another incident was a brutal confrontation between Lakhshmana, brother of lord ram and Surpnakha sister of Ravana. Where Lakshmana had cut off the nose of Surpnakha who evidently showed her interest in him. This is interpreted as insulting to women who expressed her desires. That a women who expresses her desires is witchy.

In Mahabharata, Gandhari wife of Dhritrashtra was portrayed as a selfless women who voluntarily decided to cover her eyes for the rest of her life in respect of her blind husband. This act is regarded as metaphorical where it is suggested that she self sacrificed her sight in order to protest againt the forced marriage.

So that her husband would never relish her sight. This was considered to be the height of devotion by some and regarded her as a dutiful wife .Such acts were meant to be praised and followed by other women in the society. Draupdi, wife of the five Pandu brothers was insulted when her husband set her as stake during a game of gambling. But this act is glorified as women power as Draupdi raised her voice against this injustice and called for help. Denyed help from all her husband who witnessed the humiliation Lord Krishna came to her rescue. Draupdi is regarded as fearless, devotional, virtuous.

Various hindu scriptures are also termed as derogatory, discriminatory towards women. For instance in Manusmriti, It is mentioned a number of times but it is said to be self contradictory. It is mentioned in the Manusmriti that “Where women are honored, there the Gods are pleased. Where they are not honored, no sacred rite yields rewards.” But at other occasions laws for women are barbaric. Manusmriti is accused of establishing grievous punishment, promotion of child marriage and dowry. For instance, ” In childhood a female must be subject to her father, in youth to her husband, when her lord is dead to her sons; a women must never be independent.” This suggests that women cannot enjoy independence what so ever. This has crept into our modern world as well where women are subjugated under the norm of patriarchy. Another instance ” By violating her duty towards her husband, a wife is disgraced in this world, (after death) she enters the womb of a jackal, and is tormented by diseases (as the punishment of) her sin.” Along with this, accounts of cruel punishments like burning of the accused women are also stated in the Manusmriti.  Discrimination against menstruating women is also present in the text. “Food offered and served to Brahman after Shradh ritual should not be seen by a chandal, a pig,

a cock, a dog, and a menstruating women.” In today’s world women do encounter such belief where they are not allowed to enter the kitchen or touch the utensils during their menses.

Other instances of such acts are also mentioned in the Vedas. Which is highly debated as contrary to this there are mentioned glorious images of women in same text, which is contradictory.

Women in Vedas are manifested in a godly light. Rig Veda clearly proclaims that women should be given the lead in ruling the nation and in society, and that they should have the same right as sons over the father’s property. “The entire world of noble people bows to the glory of the glorious woman so that she enlightens us with knowledge and foresight. She is the leader of society and provides knowledge to everyone. She is symbol of prosperity and daughter of brilliance. May we respect her so that she destroys the tendencies of evil and hatred from the society.”   There is also mention of female Rishis at the time of Vedas like Gargi and Mayteri who composed hymns in the Vedas. Atharva Veda states that women should be valiant, scholarly, prosperous, intelligent and knowledgeable; they should take part in the legislative chambers and be the protectors of family and society. When a bride enters a family through marriage, she is to “rule there along with her husband, as a queen, over the other members of the family.”

At other well known instance women are preached as goddeses. Like Durga The Goddes of war, Saraswati The Goddess of Knowledge, Laxmi The goddess of Wealth.

Hindu scriptures are the foundation of Hindu thought and tradition. These texts govern the working of the Hindu thought. Hence if they are found to be derogatory towards women one must put it to thought that where these ancient values fit in today’s world. These scriptures shape our perspective and we must be careful in choosing our way of thinking. As we take a shift towards reflective morality we must take into account others and their rights to flourish as well.

LOOPHOLES OF THE VEDAS

Traditions in any case often arise out of contemporary needs but seek legitimization from the past. Therefore, the past has to be brought into play where such legitimization is sought. What is ofsignificance today is the attempt to justify a custom at a particular historical juncture, a justification which involves more than merely a custom for it also symbolizes an attitude towards women as well as a view of what is regarded as ‘tradition’. It is defended as being a recognized symbol of Hindu values especially those concerning the idealized relationship between husband and wife, the assumption being that it was therefore required in theory of all Hindu women.

Its origin is generally traced to the subordination of women in patriarchal societies. But, in searching for its origins it might be as well to consider other situations which prevailed in India. The practice may have originated among societies in flux and become customary among those holding property such as the families of chiefs and ksairiyas. Once it was established as a custom associated with the ksatriyas, it would continue to be so among those claiming ksatriya status as wellit is believed by some scholars that the practice of burning widows existed in the early Vedic and post-Vedic times as well.

On the basis of the second anuvaka of the tenth mandala of the Rigveda, and two other verses found in the Aukhya Sakha of the Taittiriya Samhita quoted in the eighty-fourth anuvaka of the Narayania Upanisad, some scholars like Raja Radhakant Deb believed that this custom was prevalent during the Vedic period. However, these passages are of doubtful authenticity and cannot be accepted as incontrovertibly referring to the prevalence of the widow burning in the Vedic age.

The Visnu Parana, the Padma Purana, the Bhagavata and the Brahma Purana also cite instances ofsati, thus indicating that the institution was slowly emerging in our society between A.D. 400 and 600.

No doubt the Rig Vedic Women in India enjoyed high status in society and their condition was good. Even the women were provided opportunity to attain high intellectual and spiritual standard. But from enjoying free and esteemed positions  in  the  Rig-Vedic  society,  women  started  being  discriminated  against  since  the Later-Vedic  period  in  education  and  other  rights  and facilities. Child  marriage,  widow burning, the purdah and polygamy further worsened the women’s position.

The society is developed in 21st century the position and respect of women is deteriorated after so many constitutional provisions are not sufficient to get the respectable position in society. In Modern times technology developed, globalization and commercialism come in to existence but the status and position of women is rather deteriorated.

It may thus be concluded that in Vedic India, women did not enjoy an inferior status rather they occupied an honorable place. They had ample rights in the social and the religious fields and limited rights in the economic and the political fields. They were not treated as inferior or subordinate  but equal  to  men. Similarly, in the present context, the women has equal participation in human development and laws have been made.

We have achieved in closing the breaches to the ancient loopholes so far. No doubt, the people came to recognize the status of women outside to that of the house and family. However, several new loopholes are created as well which is the reason to why the women are still asking for their rights. One of the most exemplary example which has displayed the evolution with loopholes is – ‘Even though we have been successful in abolishing sati, but now we have given birth to the inferior status of women in the society’. The country has been successful indeed in solving the issues through various laws and initiatives but the new problems such as violence, marital rape, harassment, denial of rights and so on, have led to a new set of problems.

Despite of all such rigorous efforts to destroy the ancient loophole world, we have thrown the women into a new world of loopholes which are numerous to count with. The question which arise now is that for how long the women have to wait for their rights? Can we ever solve this maze in which not just one individual but the whole community is trapped? Will the exit of this  maze lead to a new maze or will it be finally a ray of light?

What has made Naga insurgency settlement wobble?

Women and army: Facts and Misconceptions

Need for an Independent fiscal Council for India