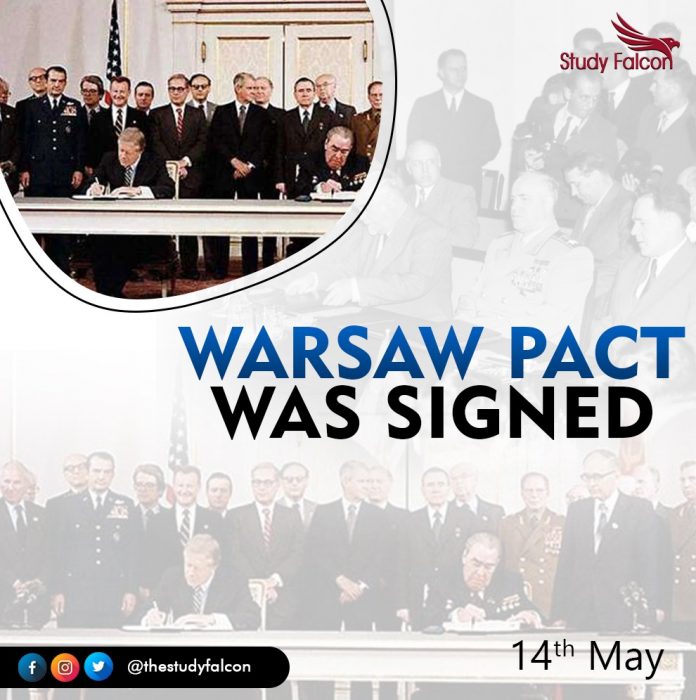 • The Warsaw Pact, a mutual defence treaty between Communist states was signed on 14 May 1955.The Warsaw Treaty Organization was a political and military alliance established between the Soviet Union and several Eastern European countries.
• The Soviet Union formed this alliance as a counterbalance to the North Atlantic Treaty Organization (NATO), a collective security alliance concluded between the United States, Canada and Western European nations in 1949.
• The Warsaw Pact so named because the treaty was signed in Warsaw and included the Soviet Union, Albania, Poland, Romania, Hungary, East Germany, Czechoslovakia and Bulgaria as members.
• The treaty called on the member states to come to the defense of any member attacked by an outside force and it set up a unified military command under Marshal Ivan S. Konev of the Soviet Union.
• The Warsaw Pact supplemented existing agreements. Following World War II, the Soviet Union had concluded bilateral treaties with each of the East European states except for East Germany, which was still part of the Soviet occupied-territory of Germany.
• When the Federal Republic of Germany entered NATO in early May 1955, the Soviets feared the consequences of a strengthened NATO and a rearmed West Germany and hoped that the Warsaw Treaty Organization could both contain West Germany and negotiate with NATO as an equal partner.
• Soviet leadership also noted that civil unrest was on the rise in Eastern European countries and determined that a unified, multilateral political and military alliance would tie Eastern European capitals more closely to Moscow.
• The Warsaw Pact remained intact until 1991. Albania was expelled in 1962 because, believing that Russian leader Nikita Khrushchev was deviating too much from strict Marxist orthodoxy, and the country turned to communist China for aid and trade.
• In 1990, East Germany left the Pact and reunited with West Germany; the reunified Germany then became a member of NATO.
• The rise of non-communist governments in other eastern bloc nations, such as Poland and Czechoslovakia, throughout 1990 and 1991 marked an effective end of the power of the Warsaw Pact.
• In March 1991, the military alliance component of the pact was dissolved and in July 1991, the last meeting of the political consultative body took place.