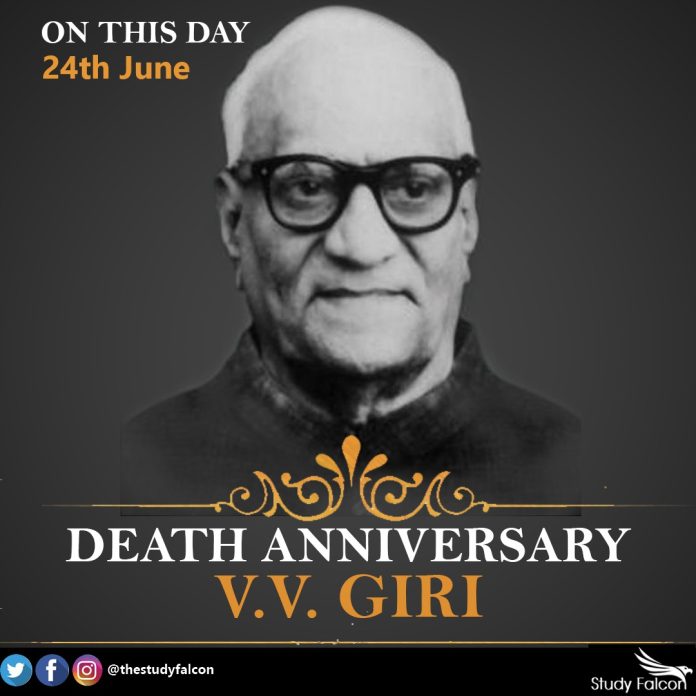 • Former President V V Giri, a patriarch of the Indian trade union movement died on 24 June 1980 at Chennai.
• Varahagiri Venkata Giri was the fourth president of India from 24 August 1969 to 24 August 1974.
• Giri was the only president to be elected as an independent candidate.He was succeeded by Fakhruddin Ali Ahmed as president in 1974.
• The Non-cooperation Movement led by Mahatma Gandhi made him plunge fulltime into politics. He relinquished his law practice in 1922 for this purpose.
• The first time he was arrested was in 1922 for demonstrating against the sale of liquor shops.
• He co-founded the All India Railway Men’s Federation in 1923, and also served as its General Secretary.
• In 1926, he was appointed as the president of the All India Trade Union Congress.
• Other organizations he co-founded include the Bengal Nagpur Railway Association and the Indian Trade Union Federation (ITUF). He was also the president of the ITUF.
• Giri represented Indian workers in the International Labour Organisation (ILO).
• In 1928, he led a workers’ non-violent agitation for the rights of retrenched employees of the Bengal Nagpur Railway.
• This incident was a landmark event in the labour movement because the government gave in and conceded to the legitimate demands of the workers.
• Giri also participated in the Second Round Table Conference. He was a member of the Madras Legislative Assembly and a member of the Imperial Legislative Council (1934 – 1937).
• After independence, he became the Labour Minister in 1952. He served as the governor of various states including Kerala, Karnataka and Uttar Pradesh.
• From 1967 to 1969, Giri was the Acting President after the death of Zakir Hussain.
• Giri was awarded the Bharat Ratna, the country’s highest civilian award in 1975.