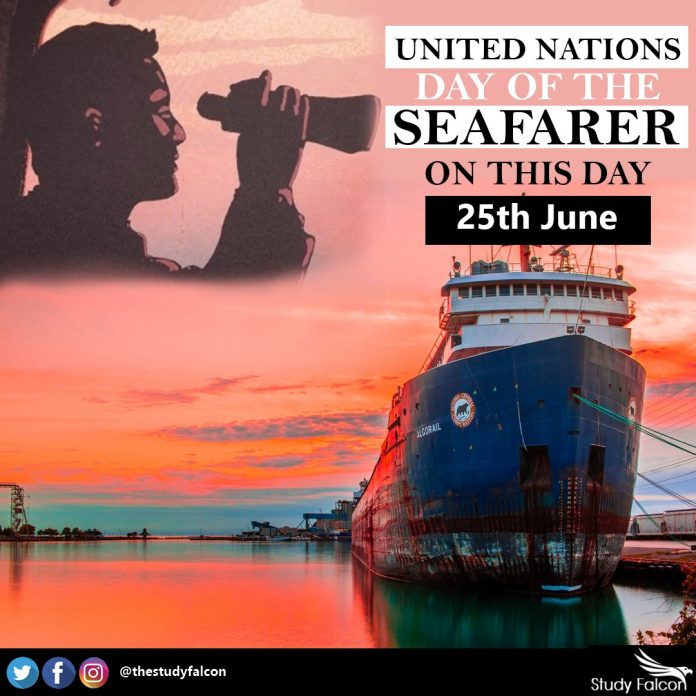 • 25 June of each year is the United Nations Day of the Seafarer, organized by International Maritime Organisation (IMO).
• It recognises the invaluable contribution seafarers make to international trade and the world economy, often at great personal cost to themselves and their families.
• Seafarers are on the frontline of the COVID-19 pandemic, playing an essential role in maintaining the flow of vital goods, such as food, medicines and medical supplies.
• However, the crisis has led to difficult working conditions for seafarers, including uncertainties and difficulties about port access, re-supply, crew changeovers and repatriation.
• As per estimates of the IMO ships transport almost 90 per cent of the world’s goods trade.
• IMO which is a specialised agency of the United Nations responsible for regulating shipping decided in 2010 to designate June 25 as International Day of the Seafarer.
• This was done to highlight the fact that almost everything we use in our daily lives is either directly or indirectly affected by sea transport.
• Since 2011, the IMO has taken the celebration of the Day of the Seafarer online, calling for the use of social media such as Facebook and Twitter, to voice support for seafarers.
• In 2020, the Seafarer campaign focused its message around urging governments to recognize seafarers as key workers and ease travel restrictions for them to facilitate crew changes.
• The 2021 Seafarer campaign will continue to encourage governments to support seafarers amid the pandemic but will expand its message, calling for a fair future for seafarers.