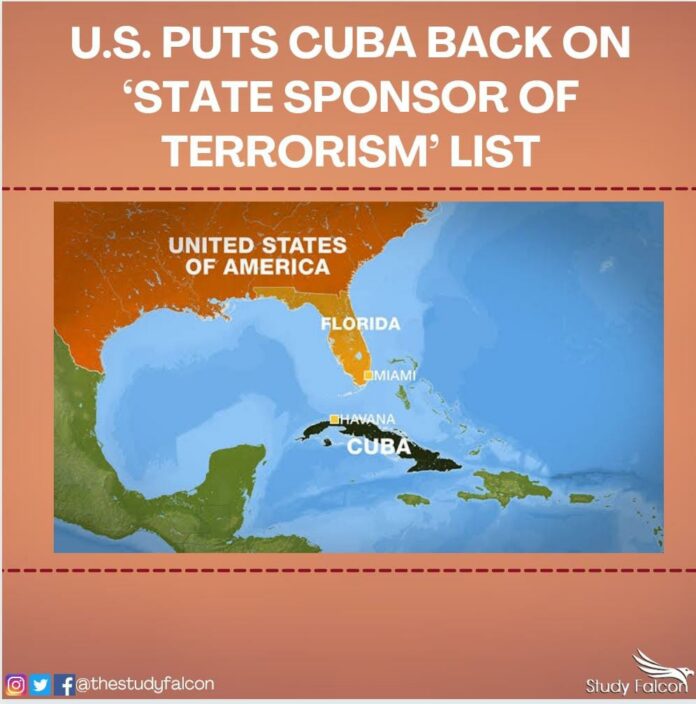 The USA State Department has designated Cuba as a State Sponsor of Terrorism for repeatedly providing support for acts of international terrorism in granting safe harbour to terrorists.

Secretary of State Mike Pompeo announced the move in a statement, noting Cuba’s harboring of US fugitives as well as its support for Venezuelan leader Nicolas Maduro. Cuba was removed from the list in 2015 by then-president Barack Obama as he moved to normalize relations with the country.

The State Department of the USA can place four categories to enlist any country as sanctioned:

Pompeo said that Cuba was being blacklisted again for “repeatedly providing support for acts of international terrorism” as well as harboring US fugitives and Colombian rebel leaders.

What does this mean for Cuba?

What concern does USA have with the Castro regime?

How were relations during Trump regime?

The United States and Cuba have had a strained relationship for more than sixty years, rooted in Fidel Castro’s overthrow of a USA-backed government in 1959. Presidents Barack Obama and Raul Castro took several steps to normalize bilateral relations, including restoring diplomatic ties and expanding travel and trade. The Trump administration has reversed aspects of the past agreements by reimposing restrictions on tourism and other commerce.

Resuming Washington’s blockade against Cuba appears to be the most unjust, prolonged system of unilateral sanctions applied against any country. There is an urgent need to improve the relationship between the two countries through bilateral talks. As a large population of Cuban immigrants and people with Cuban roots reside in the USA, it is for the sake of democracy and spirit of internationalism that the two countries make efforts towards reconciliation.