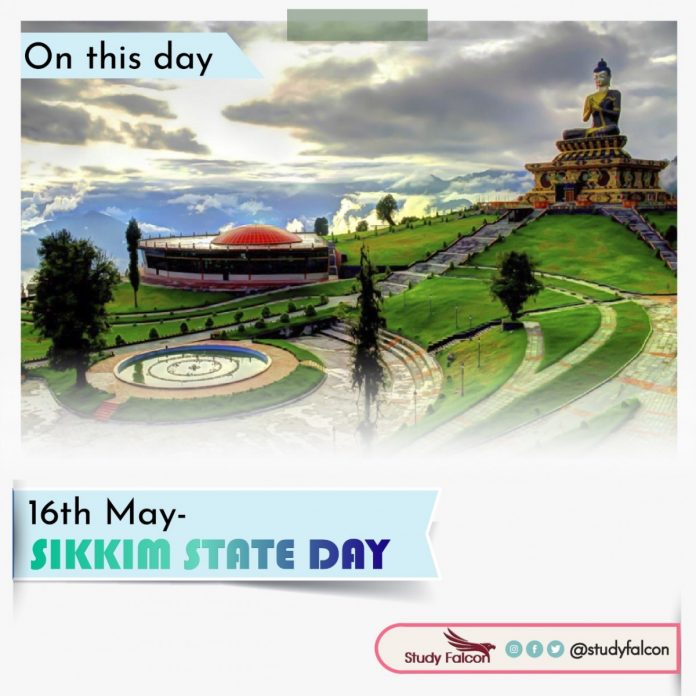 • This state holiday in Northeast India is observed on May 16th. It marks the day in 1975 when Sikkim became the 22nd state of India.
• India’s least populous state officially became a part of India. It is for this cause that this day is celebrated as Sikkim Day.
• The Kingdom of Sikkim dates back to the 17th century when it was founded by the Namgyal dynasty.
• It was ruled by a monarchy of Buddhist priest-kings known as Chogyal. Sikkim became a principality within British India in 1890.
• After India and Pakistan’s independence in 1947, Sikkim continued to have protectorate status within the Republic of India.
• In 1975, growing unrest against the rule of the Chogyal, including a direct appeal from the Sikkim Prime Minister for Indian help, led to the Indian military deposing the Chogyal and abolishing the Sikkimese monarchy.
• A referendum was then held in which 97.5% of voters supported the abolition of the monarchy and led to Sikkim joining India as its 22nd state.
• Nestled within the Himalayas, Sikkim is the least populous and second smallest of all Indian states.
• The peak of India’s largest mountain, Kangchenjunga, the world’s third-highest peak – lies within Sikkim.
• The state has a special emblem. The State Animal of Sikkim is Red Panda, state bird is Blood Pheasant, the state flower is Noble dendrobium and state tree is Rhododendron.
• On May 16, 2021, the Sikkim Government celebrates its 46th Statehood Day.