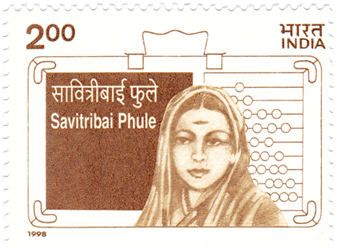 My teacher told me about Savitri Mai, about how people threw stones at her for teaching girls. But still she went ahead and built a school for girls. From then, I owe to her, but the first women teacher of India who started first ever school for such marginalized communities and specifically for girls and untouchables who always had been denied education since centuries, is still an unknown figure in the history and usually not remembered by the majority of Indian society for the pioneering role she played as a teacher and a woman liberator in the second half of nineteenth century.

This is rather a very unusual question and has never been asked or addressed in any of our school text books like other questions such as Who was the first Prime Minister of India or who was the first Indian who touched the surface of Moon? I really wonder that why she is missing from the school text books of most Indian States. All of those who do not know about Savitri mai, must make an attempt to know her and her work she’s the reason why we are getting to go to schools today,

Savitribai Phule was born on 3 January 1831, at Naigaon in Maharashtra’s Satara District. She was the eldest daughter of Lakshmi and Khandoji Neveshe Patil, both of whom belonged to the Mali community, now an Other Backward Caste (OBC). At the age of 9, she was married to 13-year-old Jyotirao Phule.

Savitri was not educated at the time of her marriage, as she was from a backward caste and a woman. The dominant Brahmin class did not allow men from backward caste communities and women to get an education—Jyotirao Phule, better known as Jyotiba, for instance, was forced to leave school because of his caste. However, on the encouragement of the Persian scholar Ghaffar Baig Munshi and a British official, Lizit Sahab, Jyotiba was enrolled in a Scottish missionary school where he studied till class VII.

It is important to understand the milieu in which the young Savitri grew up. Public education was yet to emerge and there were only a few missionary schools which were “open to all”. Brahmins were the only caste group that received an education and could take a lead in setting up schools. This was the context in which Jyotiba, at the age of 21, and Savitri, 17, opened a school for women in 1848. It was the country’s first school for women started by Indians.

Savitribai Phule was taught by Jyotiba at their home. Later, she took a teacher’s training course at an institute run by an American missionary in Ahmednagar and in Pune’s Normal School. She then started teaching girls in Pune’s Maharwada, along with Sagunabai, a revolutionary feminist and a mentor to Jyotiba. Soon after, the Phule couple along with Sagunabai started their school at Bhide Wada, the home of Tatya Saheb Bhide, who was inspired by the Phules’ work. The school’s curriculum was different from what was taught by Brahmin teachers in their home schools. It included mathematics, science and social studies instead of Brahmanical texts like Vedas and Shastras.

It is said that Savitribai used to carry an extra sari while walking towards her school as people used to hurl stones and dung at her, apart from verbal abuses. By the end of 1851, the Phules were running three schools in Pune with around 150 girl students. The teaching methods at their schools were believed to be better than government schools and soon the number of girls enrolled in Phule’s schools outnumbered that of the boys in government schools.

In 1849, Jyotiba’s father asked the couple to move out of his house since the work they were engaged in was considered a sin according to Brahiminical texts. They stayed with the family of a friend of Jyotiba’s, Usman Sheikh, where Savitribai met Fatima Begum Sheikh. “Fatima Sheikh knew how to read and write already, her brother Usman who was a friend of Jyotiba, had encouraged Fatima to take up the teacher training course. She went along with Savitribai to the Normal School and they both graduated together. She was the first Muslim woman teacher of India,” says Nasreen Sayyed, who has authored a book on Sheikh and translated Savitribai’s poems to Urdu.

Fatima and Savitribai opened a school in Usman Sheikh’s house in Pune in 1849. Their friendship, camaraderie and sisterhood define the core values of what we call intersectional feminism today.

In the 1850s, the Phule couple initiated two educational trusts—the Native Female School, Pune and The Society for Promoting the Education of Mahars, Mangs and Etceteras—which came to have many schools under them. Savitribai was the headmistress of one of these schools; Fatima Sheikh was also asked to take over the responsibility of a school in 1855. According to Sayyed, Muslim girls would have been more “assertive and well educated today”, if the community had recognized Fatima’s work.

In 1852, Savitribai, a staunch feminist, started the Mahila Seva Mandal to raise awareness about women’s rights. Savitribai called for a women’s gathering where members from all castes were welcome and everybody was expected to sit on the same mat.

She also started the Home for the Prevention of Infanticide in her house, a place where Brahmin widows could deliver their babies safely. They could leave the child there if they could not take care of it. In fact, Savitribai also adopted a child, Yashwant, who was born at the shelter. She simultaneously campaigned against child marriage, while supporting widow remarriage.

The early 1870s marked the beginning of Phules’ public activism. There were organizations like Arya Samaj, Brahmo Samaj and Prarthana Samaj at that time started by Brahmin leaders, which arguably served only Brahmin interests. Jyotiba and his colleagues saw the need for an organization that served the interests of non-Brahmins and started Satyashodhak Samaj in 1873. After Jyotiba’s death in 1890, Savitribai carried forward the work of the organization and also chaired the annual session held at Saswad in 1893. A woman chairing a session in those times was revolutionary in itself.

She initiated the first Satyashodhak marriage—a marriage without dowry, Brahmin priests or Brahminical rituals. Yashwant, too, had a Satyashodhak inter-caste marriage.

In her letter to Jyotiba (published in A Forgotten Liberator: The Life And Struggle Of Savitribai Phule), Savitribai talks about an incident that took place in 1868 at Naigaon. A Brahmin boy was on the verge of being killed by villagers for his “unholy” alliance with a Dalit girl when Savitribai intervened. She writes, “I came to know about their murderous plan. I rushed to the spot and scared them away, pointing out the grave consequences of killing the lovers under the British law. They changed their mind after listening to me.”

They are feminist icons who defined intersectional feminism through their lives and work back in the 19th century, much before the phrase became a buzzword on Twitter. In 2014, the University of Pune was renamed Savitribai Phule University, in recognition of her life and work. It is ironical that the mainstream feminist movement in India does not acknowledge these women. Instead, their role is confined to the work done for “certain” communities. We need to understand that we cannot fight for “women’s rights” without acknowledging the intersections of gender and caste.

Savitribai was also a fiery author and poetess. She published Kavya Phule in 1854 and Bavan Kashi Subodh Ratnakar in 1892. In her poem, Go, Get Education, she urges the oppressed communities to get an education and break free from the chains of oppression.

Be self reliant, be industrious

All gets lost without knowledge

We become animals without wisdom.

End misery of the oppressed and forsaken.

You have got a golden chance to learn

So learn and break the chains of caste

Throw away the Brahman’s scriptures fast.