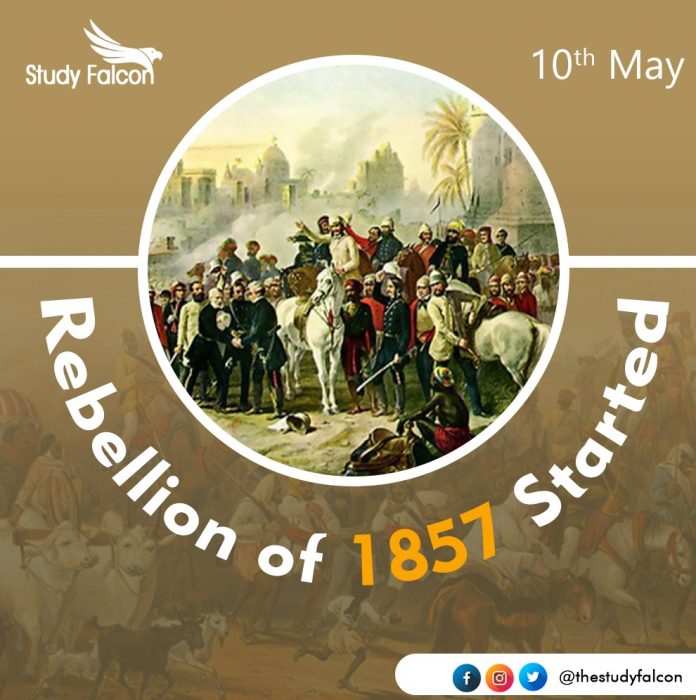 • The Indian Rebellion of 1857 was a major, but ultimately unsuccessful, uprising in India in 1857–58 against the rule of the British East India Company, which functioned as a sovereign power on behalf of the British Crown.
• The rebellion began on 10 May 1857 in the form of a mutiny of sepoys of the Company’s army in the garrison town of Meerut, 40 mi (64 km) northeast of Delhi.
• It then erupted into other mutinies and civilian rebellions chiefly in the upper Gangetic plain and central India, though incidents of revolt also occurred farther north and east.
• The rebellion posed a considerable threat to British power in that region,and was contained only with the rebels’ defeat in Gwalior on 20 June 1858.
• On 1 November 1858, the British granted amnesty to all rebels not involved in murder, though they did not declare the hostilities to have formally ended until 8 July 1859.
• It has various names- the Sepoy Mutiny, the Indian Mutiny, the Great Rebellion, the Revolt of 1857, the Indian Insurrection, and the First War of Independence.
• The Indian rebellion was fed by resentments born of diverse perceptions, including invasive British-style social reforms, harsh land taxes, treatment of some rich landowners and princes, as well as scepticism about the improvements brought about by British rule.
• Many Indians rose against the British; however, many also fought for the British, and the majority remained seemingly compliant to British rule.
• After the outbreak of the mutiny in Meerut, the rebels quickly reached Delhi, whose 81-year-old Mughal ruler, Bahadur Shah Zafar, was declared the Emperor of Hindustan. Soon, the rebels had captured large tracts of the North-Western Provinces and Awadh (Oudh).
• The East India Company’s response came rapidly as well. With help from reinforcements, Kanpur was retaken by mid-July 1857, and Delhi by the end of September.
• However, it then took the remainder of 1857 and the better part of 1858 for the rebellion to be suppressed in Jhansi, Lucknow, and especially the Awadh countryside.
• Other regions of Company-controlled India- Bengal province, the Bombay Presidency, and the Madras Presidency, remained largely calm.
• In the Punjab, the Sikh princes crucially helped the British by providing both soldiers and support.
• The large princely states, Hyderabad, Mysore, Travancore, and Kashmir, as well as the smaller ones of Rajputana, did not join the rebellion.
• In some regions, most notably in Awadh, the rebellion took on the attributes of a patriotic revolt against British oppression. However, the rebel leaders proclaimed no articles of faith that presaged a new political system.
• Even so, the rebellion proved to be an important watershed in Indian and British Empire history. It led to the dissolution of the East India Company, and forced the British to reorganize the army, the financial system, and the administration in India, through passage of the Government of India Act 1858. India was thereafter administered directly by the British government in the new British Raj.
• On 1 November 1858, Queen Victoria issued a proclamation to Indians, which while lacking the authority of a constitutional provision, promised rights similar to those of other British subjects.