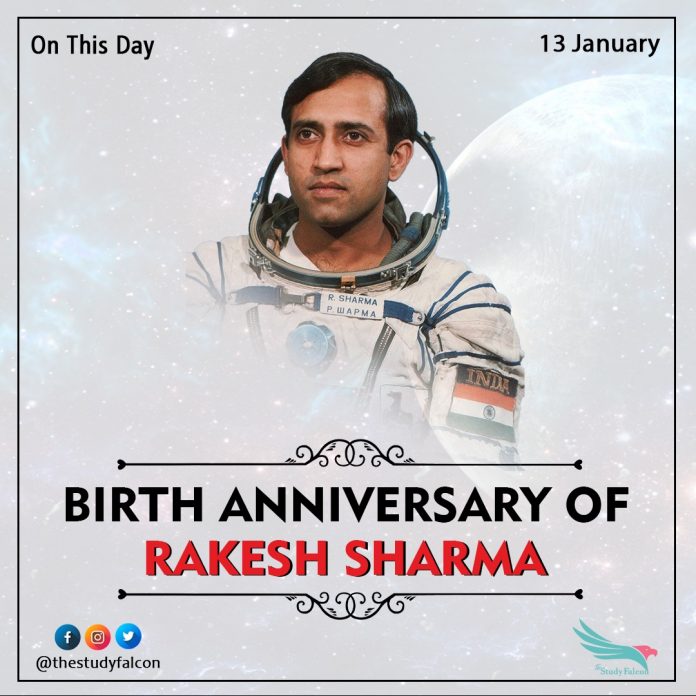 Who is Rakesh Sharma?
Wing Commander Rakesh Sharma, AC (born 13 January 1949) is a former Indian Air Force pilot who flew aboard Soyuz T-11 on 3 April 1984 as part of the Soviet Interkosmosprogramme.

He is the only Indian citizen to travel in space, although there have been other astronauts with an Indian background who were not Indian citizens.

Early Life of Rakesh Sharma
He was born on 13 January 1949 in Patiala of present-day Punjab, India. He attended St. George’s Grammar School, Hyderabad and graduated from Nizam College, Hyderabad.

He joined the National Defense Academy as an air force plebe in July 1966 and was commissioned into the Indian Air Force as a pilot in 1970.

In 1984, Sharma became the first Indian citizen to enter space when he flew aboard the Soviet rocket Soyuz T-11. He spent 7 days, 21 hours, and 40 minutes aboard the Salyut 7 during which his team conducted scientific and technical studies. His work was mainly in the fields of bio medicine and remote sensing.

When Indira Gandhi asked Sharma how India looked from outer space, he replied, “Sare Jahan Se Accha” (the best in the world).

Military awards and decorations
Rakesh Sharma was conferred the honour of the “Hero of the Soviet Union” upon his return from space, the only Indian to have been conferred this honour.

India also conferred its highest peacetime gallantry award, the Ashoka Chakra, on him.