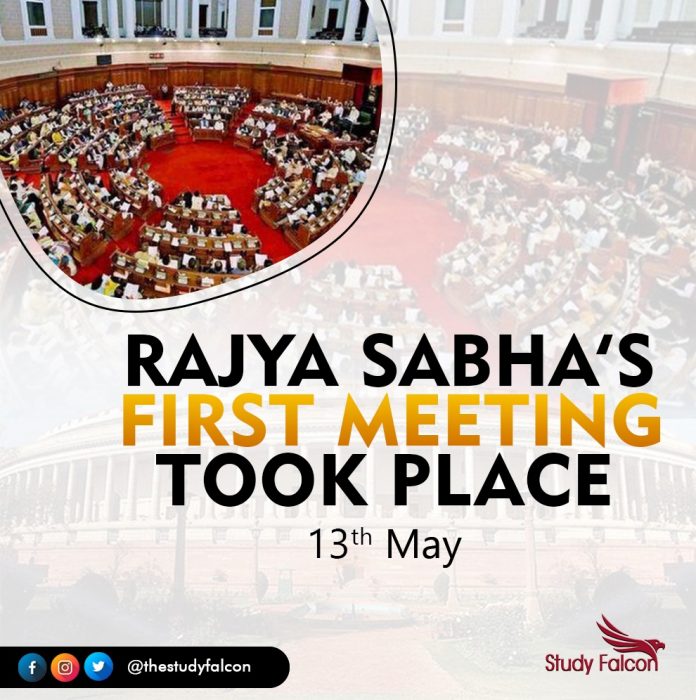 • On May 13, 1952, Rajya Sabha held its first session. The Rajya Sabha or Council of States is the upper house of the bicameral Parliament of India.
• After extensive debates in the Constituent Assembly regarding the utility or need of a Second Chamber in the Parliament, it was decided to have a bicameral legislature, because it was considered that a federal system was the most feasible form of government for a vast and diverse country like India.
• Therefore, a second chamber known as the ‘Council of States’ was created from a different composition and method of the election than that of Lok Sabha.
• The second chamber had a smaller membership than Lok Sabha, House of People.
• This ‘Second Chamber’ of the Parliament of India, was later named as the Rajya Sabha, on August 23, 1954.
• The Upper House of Parliament of India currently has a provision for 250 members.
• As of 2021 it has a maximum membership of 245, of which 233 are elected by the legislatures of the states and union territories using single transferable votes through Open Ballot while the President can appoint 12 members for their contributions to art, literature, science, and social services.
• The potential seating capacity of the Rajya Sabha is 250, out of which 238 elected, 12 appointed, according to article 80 of the Indian Constitution.
• Members sit for staggered terms lasting six years, with elections every year with about a third of the 233 designates up for election every two years, in even-numbered years.
• As only a third of the seats are filled every two years, therefore the upper house acts as a check against potential impetuousness of electoral majorities in the Lower House.
• The Vice President of India is the ex-officio Chairman of the Rajya Sabha, who presides over its sessions.
• The Deputy Chairman, who is elected from amongst the house’s members, takes care of the day-to-day matters of the house in the absence of the Chairman.
• Lok Sabha members are directly elected by the people, therefore are susceptible to passions of the moment and electoral considerations. Their imprint on legislation needs to be checked by the upper house whose members are expected to be sober, wise and well-informed with domain knowledge.
• The mandate of the Rajya Sabha is to revise or delay legislation without proving a clog in the wheel of the progress. The upper house has to represent the interests of the States as a federal chamber and be a deliberative body holding high-quality debates on important issues.
• The Rajya Sabha meets in continuous sessions, and unlike the Lok Sabha, being the lower house of the Parliament, the Rajya Sabha, which is the upper house of Parliament, is not subjected to dissolution. However, the Rajya Sabha, like the Lok Sabha can be prorogued by the President.
• The Rajya Sabha has equal footing in legislation with the Lok Sabha, except in the area of supply, where the latter has overriding powers.
• In the case of conflicting legislation, a joint sitting of the two houses can be held, where the Lok Sabha would hold greater influence because of its larger membership.
• The Rajya Sabha meets in the eponymous chamber in Parliament House in New Delhi. Since 18 July 2018, the Rajya Sabha has facility for simultaneous interpretation in all the 22 scheduled languages of India.