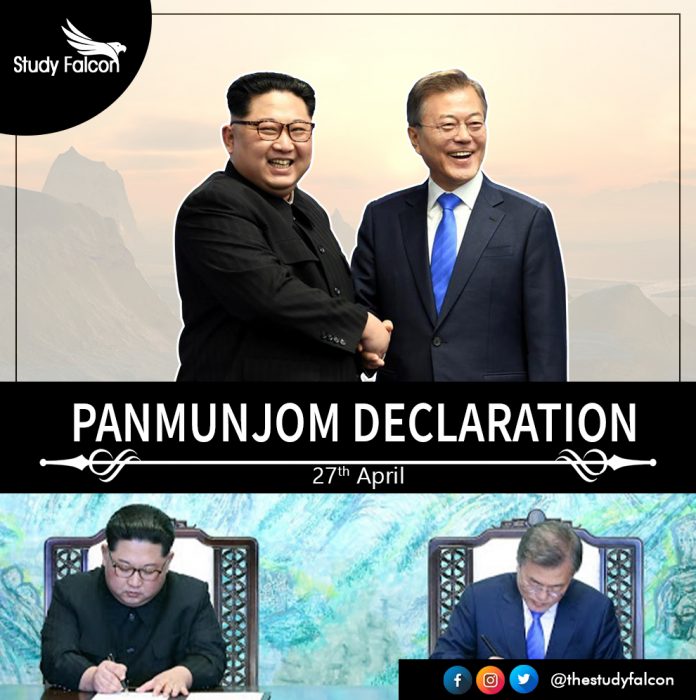 • The Panmunjom Declaration for Peace, Prosperity and Reunification of the Korean Peninsula was adopted
between the Supreme Leader of North Korea, Kim Jong-un, and the President of South Korea, Moon Jae-in, on
April 27, 2018.
• It was adopted during the 2018 inter-Korean Summit on the South Korean side of the Peace House in the Joint
Security Area.
• According to the declaration, the governments of North Korea and South Korea agreed to cooperate on
officially ending the Korean War and the Korean conflict.
• Beginning a new era of peace and sharing commitments in ending divisions and confrontation by approaching a
new era of national reconciliation, peace, reunification and prosperity and improvements to inter-Korean
communication and relations.
• This declaration agreed that both sides would “make active efforts to seek the support and cooperation of
the international community for the denuclearization of the Korean peninsula”.
• The declaration was submitted to the United Nations General Assembly on September 6, 2018.
• The two leaders solemnly declared before the 80 million Korean people and the whole world that there will
be no more war in Korea and thus a new era of peace has begun.
• Promote common prosperity and reunification of Korea through dramatic improvement and development of inter-
Korean relations:
o Continue high-level working-level talks for the full implementation of the agreement.
o Establishment of Joint Liaison Office in Gaeseong between South and North Korea.
o Multilateral cooperation and exchange.
o Inter-Korean Red Cross talks and reunions of separated-families on 15 August 2018.
o Connecting and modernizing roads with Donghae and Gyeongui railways.
• Elimination of military tension and substantial elimination of war risk
o Cease all hostile acts
o Designed as a peace zone in the western part of the west coast
o Establishment of military mutual guarantee measures through high-rank military-level talks
• Establishing a permanent and peaceful Korean peninsula peace regime
Inviolable agreement
o Stepwise disarmament
o In celebration of the 65th anniversary of the Korean Armistice Agreement in 2018, South and North Korea co-
operate closely with the US and China to establish a peace treaty on the Korean peninsula after ending the
1953 Korean War.
o Finalise the complete denuclearization of the Korean peninsula