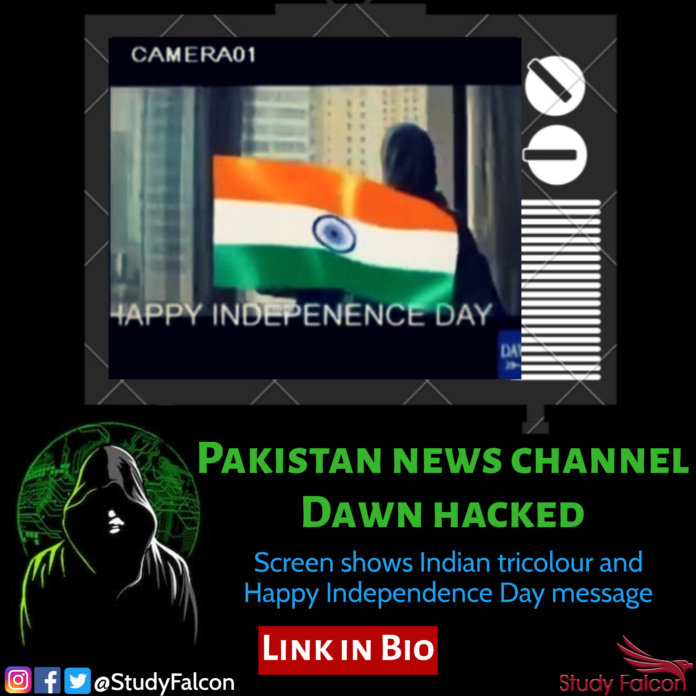 The ‘Happy Independence Day’ message appeared on a channel in Pakistan around 3:30 pm on Sunday.

A leading Pakistan TV news channel, Dawn, was apparently hacked on Sunday, a few photographs and recordings surfacing on the web appeared.
While a commercial was running on the news channel, the Indian flag showed up over it with a message saying ‘Happy Independence Day’. This was spotted by many Twitter users.

The occurrence turned into a web sensation via web-based networking media and clasps of the communicate were circled on Twitter.

In the meantime, Dawn News put out a tweet in Urdu saying “The Dawn organization has requested a quick examination concerning the issue.”
Dawn News likewise gave a statement saying it was broadcasting as regular when the Indian tricolor and Independence Day wish showed up over the commercial abruptly, stayed on the screen for quite a while, and later vanished.

The organization is researching the issue and will educate its viewers when it arrives at a last resolution.”

In July, the site of the Director-General of Public Relations of Pakistan-involved Kashmir (PoK) was hacked. In a message posted on the site, the Imran Khan administration had been blamed for human rights infringement.