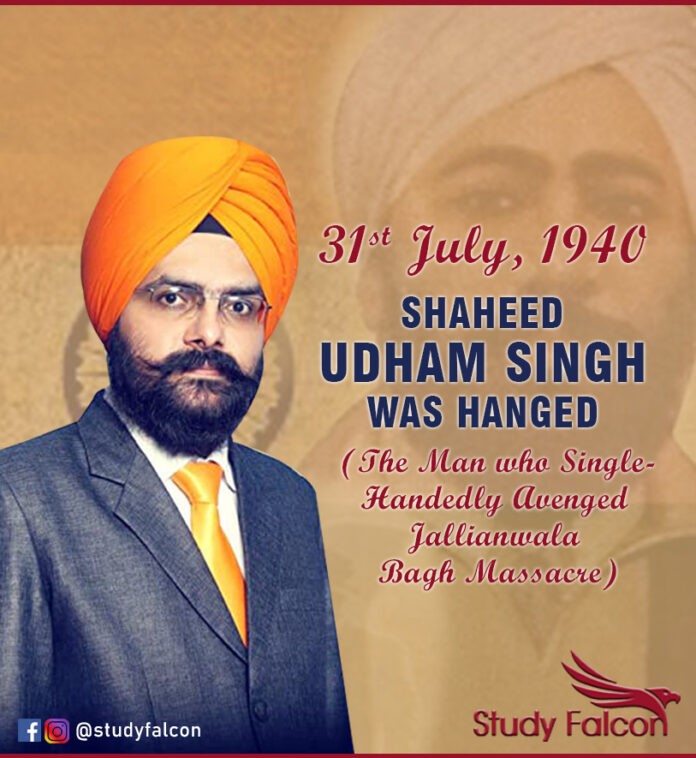 Shaheed  Udham Singh is a well-known figure of the Indian Independence Movement. He is sometimes referred to as Shaheed-i-Azam Sardar Udham Singh (Shaheed-i-Azam”, means “the great martyr”).

Udham Singh was born as Sher Singh in Sangrur, Punjab. Singh became an orphan at an early age and was taken away by Central Khalsa Orphanage, Putlighar. He was named Udham Singh after he joined the orphanage. He accomplished his matriculation in 1918 and left the orphanage in 1919.

Throughout the peaceable gathering at Jallianwala Bagh in Amritsar in 1919, Udham Singh and his associates from the orphanage have been serving water to the gang. He was an eyewitness of the Jallianwala Bagh massacre in 1919. In 1924, Udham Singh acquired himself concerned with the Ghadar Celebration. In 1927, he returned to India on orders from Bhagat Singh, bringing 25 associates in addition to revolvers and ammunition.

Udham Singh comes across as one of the most dramatic personalities of the colonial period – he avenged the Jallianwala Bagh massacre after waiting for 21 long years, travelled the world using aliases, and even acted as an extra in two British films – Elephant Boy (1937) and The Four Feathers (1939).

Udham Singh belonged to Ghadar party and was best known for the assassinating Michael O’ Dwyer, the former Lieutenant Governor of Punjab in India.On 13 March 1940, Michael O’Dwyer was scheduled to speak at a joint meeting of the East India Association and the Central Asian Society at Caxton Hall, London. Singh was subsequently tried and convicted of murder and hanged in July 1940. While in custody, he used the name Ram Mohammad Singh Azad, which represents the three major religions of Punjab and his anti-colonial sentiment.

He considered Bhagat Singh as his role model. He has been honoured with the title of Shaheed-i-Azam. The weapons he used in killing General Dwyer have been kept in a Black Museum, Scotland Yard. History weapons included a knife, a diary and bullets. While awaiting his trial, Singh went on a 42-day hunger strike and had to be forcibly fed. Singh was hanged at Pentonville Prison in July 1940.

On 31 July 1940, Singh was hanged at Pentonville Prison. Mahatma Gandhi expressed disenchanted on the revolutionary’s motion of Udham Singh. Nonetheless, Punjab part of the Indian Nationwide Congress and the youth applauded him.

His remains are preserved at the Jallianwala Bagh in Amritsar, Punjab. On every 31 July, marches are held in Sunam by various organizations and every statue of Singh in the city is paid tribute with flower garlands.