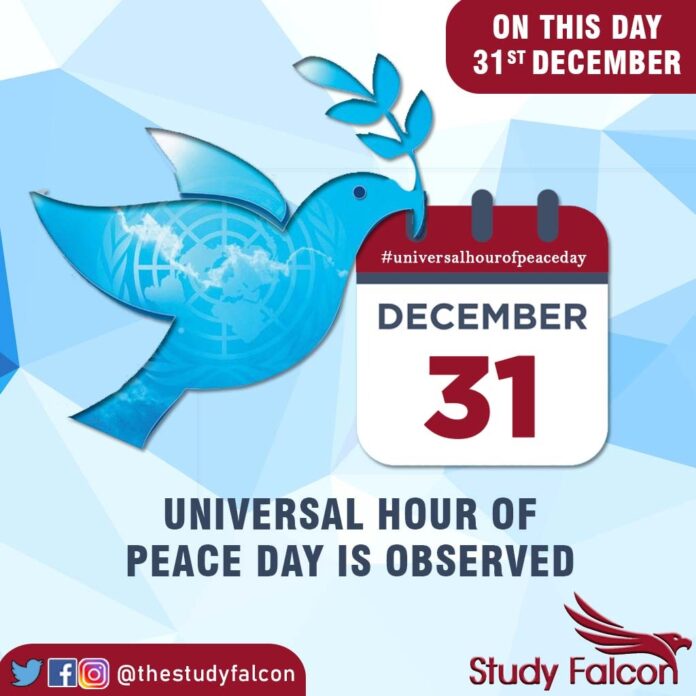 From 11:30 p.m. on December 31st to 12:30 a.m. on January 1st each year, Universal Hour of Peace hopes to take a step toward a war-free world. The day encourages the promotion of peaceful activities during the hour of observance.

Organizations around the world host events supporting an hour of peace. Some include prayer, music, poetry, or speeches. While gatherings may be large or small, the effort overall will be to spread the word of peace in every heart and mind regardless of faith.

It was a day looked forward to with anticipation, planned for (as it was quite early in the day or late at night for some parts of the world) and then practiced with reverence. Experiencing it, there was a very unique and special quality, a perceptible unity of mind with others that can only be experienced in living a common ideal.

The second Universal Hour of Peace was moved to January lst at noon GMT in order for people around the world to begin their year in the spirit of peace. Individuals discovered that a whole year can be changed in starting out this way, by creating a consciousness that lingers in one’s awareness and rests gently in everyone’s interactions. Since this hour of peace had been practiced, the learning could be realized from it. And it was memorable because of its beauty, simplicity and rightness. Those participating made an inner and outer commitment to peace which enabled them to have the power to look at the world in new, more positive ways and to enrich any of their relationships. And this opens up doors to spiritual growth. It is now celebrated from 11:30 p.m. December 31st to 12:30 a.m. January 1st.

Why Universal Hour of Peace

No one is free from conflicts in this world. It is natural for all of us to seek ways to experience peace for at least some time. With this thought, the Universal Hour of Peace is celebrated to encourage people to have an hour without fights among family and friends or worry about what needs to be done next or how you are going to handle the next year, etc. During this hour, even soldiers withhold their fire.

With everything being competitive and proactive, we are so engrossed with being prepared for tomorrow. When you compete with others, it is natural to make enemies and hold grudges. As much as man is capable of building anything, he is also capable of destruction. In the same lines maintaining peace at all times with all people is a challenge that no one can master well.

Peace cannot exist if people are divided among themselves. Peace needs to exist in our thoughts, words, and actions too.

In honor of the founder of Universal Hour of Peace, Dr. Barbara, as well as to find peace in this chaotic world, students and faculty of College of Metaphysics participate in their annual vigil titled – ONE VOICE to meditate for 20 hours and 16 minutes starting at 3..45 a.m. on December 31st and end at midnight.

Here are some interesting facts you didn’t know about Peace!

Studies show that we breathe shallow and thus absorb low oxygen into our bodies. Our brain needs a good amount of oxygen to function efficiently and so does the rest of the body. Thus you may celebrate your Universal Hour of Peace by meditating on your breath today!

There is nothing more relieving and peaceful than making peace with your past. Celebrate the Universal Hour of Peace by forgiving yourself and others who have hurt you.

Invite loved ones for a time of reflection of the past year of what went well and what can be improved. You will be happy to know more about their life this way!

The vision of the Universal Hour of Peace to unite all people of the Earth toward a common pursuit of peace of mind was motivating and inspiring. Immediately, individuals began to imagine how this simple act of an hour of peaceful thought and action could change their world and how that would increase in power with thousands of others like-minded people participating as well. The potential was immense.

At the hour of 4 am in Los Angeles, noon in London, 5 pm in New Delhi, or 9 pm in Tokyo millions of people would be creating a common consciousness and action of something as holy as peace. What a transformative experience for an individual’s growth in consciousness and in building a true connection with others. And the benefits to humanity as a whole would then follow from the individual’s elevated thinking. This could be the shift needed to bring about a world free from war, a world in which people respected and valued others for their special understandings, a world in which aiding others became the common theme rather than fighting crime. These, and many more benefits are results of a peaceful heart and mind.