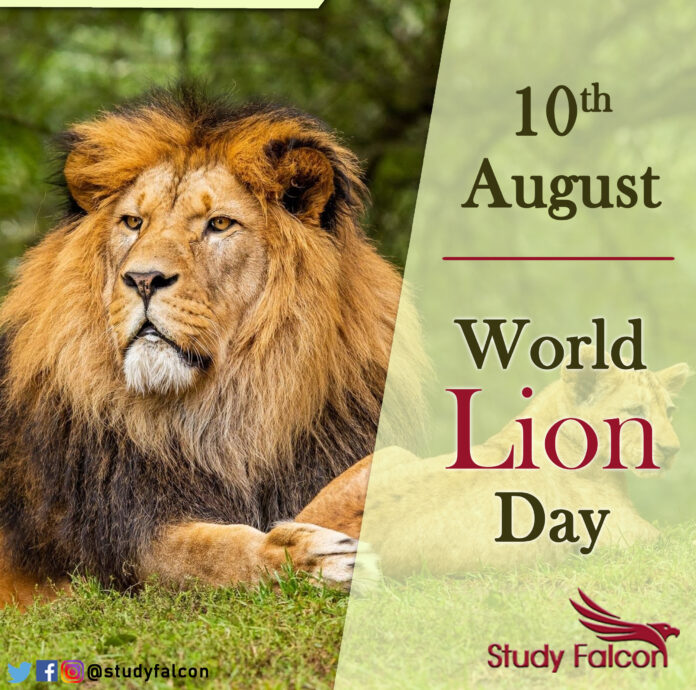 On 10th August, World Lion Day celebrates all sub-species of lion, aims to raise awareness of the majestic hunter, the ultimate feline and the king of the jungle, and brings attention to the threats they face everywhere.

This celebration of the animal kingdom’s most beautiful and fearsome creature was founded by Big Cat Rescue, the world’s largest accredited sanctuary dedicated to big cats.

The Lions are one of the big cats in the Panthera genus and a member of the Felidae family. Lions are the second-largest living cat after the tiger. Wild Lions currently exist in India and Sub-Saharan Africa.

The lion has been under threat of poachers for centuries, as well as growing human populations in Africa and Asia. National Geographic notes that scientists estimate that there could be as few as 20,000 lions left in the wild in Africa.

Asiatic lions, (Panthera leo persica), are one of the seven sub-species of lions in the world. There are a little over 500 of them left. The Asiatic lion found in India is listed as endangered in the International Union for Conservation of Nature (IUCN) red list and are found mainly in the restricted Gir forest and its surrounding areas.

In the past, the Asiatic lion roamed over the Indo-Gangetic plains, extending from Sindh in the west to Bihar in the east. Paintings, literature and the records of lion hunt reveal that the lions were the royal animal during the Mauryan and the Gupta period and enjoyed an important place during the Mughal period too.

They live in the Gir National Forest in the state of Gujarat, India, and close to nearby communities in the area. They differ from the African lion in size, (they are slightly smaller). Males tend to not live with the females of the pride unless they are mating or have a large kill. They are listed as Endangered (very high risk of extinction in the wild) by the International Union for Conservation of Nature (IUCN).

In 1936, a census found that there were 150 lions. The 2015 census found 523 lions living in the forest. Since 2010, the population has grown by 27 percent, proving that conservation efforts have worked.

There is a difference between the lion and the other predatory animals. Lion only hunts when it is hungry; it never believes in killing excessively. Lions are strategic hunters, and they hunt and eat together. During the daytime they take possession of water points in the jungle, they wait ambushed at these points and jump on unsuspecting animals coming for drinking water. An average pride compromises one or two dominant males, four or five adult females and several cubs.

A family group of lionesses defend their area against other groups and also intruding males. The average size of a group is 4-6 and normally one to three groups are part of a pride. When sub-adult males reach the age of three years, they are forced to leave the group but female sub-adults may integrate with group.

A lion is an apex predator and ensures ecological balance as it helps to control the populations of browsers and grazers. Its conservation provides protection of natural forest areas and habitats and in turn, helps in biodiversity conservation. In Gir protected area, many water resources are safeguarded in the lion kingdom.

The lion is also a part of Indian mythology and has been a part of its cultural identity. The local people in Gir and greater Gir region take pride in coexistence with nature and are emotionally attached to lions.

Lions are a keystone species in the ecosystem because they help to control the populations of browsers and grazers. They like to dine on wildebeest, zebra, buffalo, gemsbok and giraffe, and have been known to prey upon warthogs, porcupines and small reptiles.

The IUCN’s Red List has declared that lions are Vulnerable and according to EWT, the wild lion population in Africa has halved in the last 25 years. EWT’s Conservation Science Unit Lion Database Coordinator Sam Page-Nicholson says that some parts of Africa have seen a decrease of 43% over three lion generations while others have experienced population extinctions.