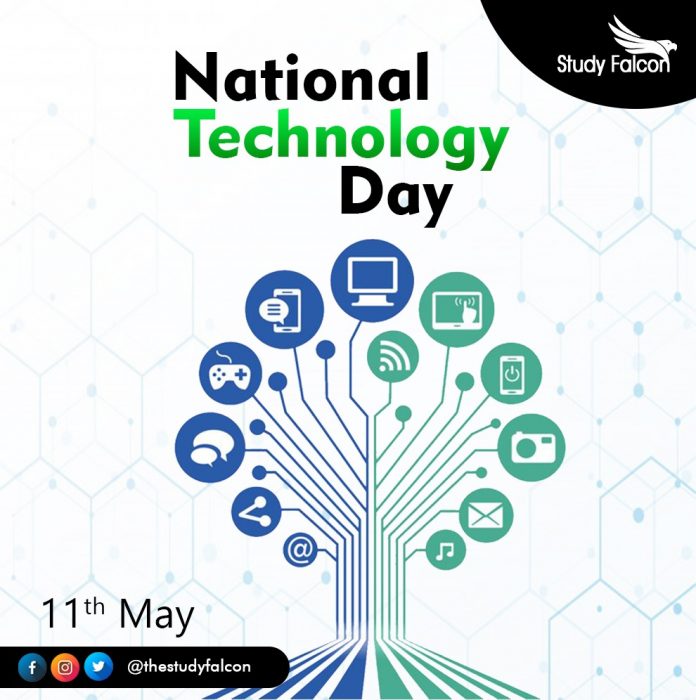 • Every year, May 11 is observed as National Technology Day. This day marks the anniversary of Pokhran nuclear tests of 1998 and India’s technological advancements in space.
• Pokhran nuclear tests were a series of five nuclear bomb test explosions conducted by the Indian Army at the Pokhran Test Range.
• It is also celebrated to honour technological advancements and their successful commercialization which takes the fruits of research to reach people at large.
• On May 11, 1998, India successfully fired an Operation Shakti missile at the Indian Army’s Pokhran Test Range in Rajasthan. This was the first among the five nuclear tests in Pokhran. The Test was led by late aerospace engineer and President Dr. APJ Abdul Kalam.
• Later, Prime Minister Atal Bihari Bajpayee declared India as a nuclear state. This made India the sixth country to join the nuclear club of nations. Hence, in India, since 1999, May 11 is celebrated as National Technology Day.
• The aim to celebrate National Technology Day is to highlight the achievements of India’s scientists and engineers in the field of science and technology.
• Apart from testing missiles, the Defense Research and Development Organization also accomplished the last test-fire of the Trishul missile which was introduced by the Indian Air Force and the Indian army.
• Apart from this, India on this day also tested its first indigenous aircraft ‘Hansa-3’ which flew from Bengaluru. After testing Hansa-3, India performed a successful test firing of the Trishul missile on May 11, 1998 and added another feather to the cap of Defence Research and Development Organization.
• Every year since 1999, the Technology Development Board (TDB) commemorates the day by honouring technological innovations that have added to the national growth.