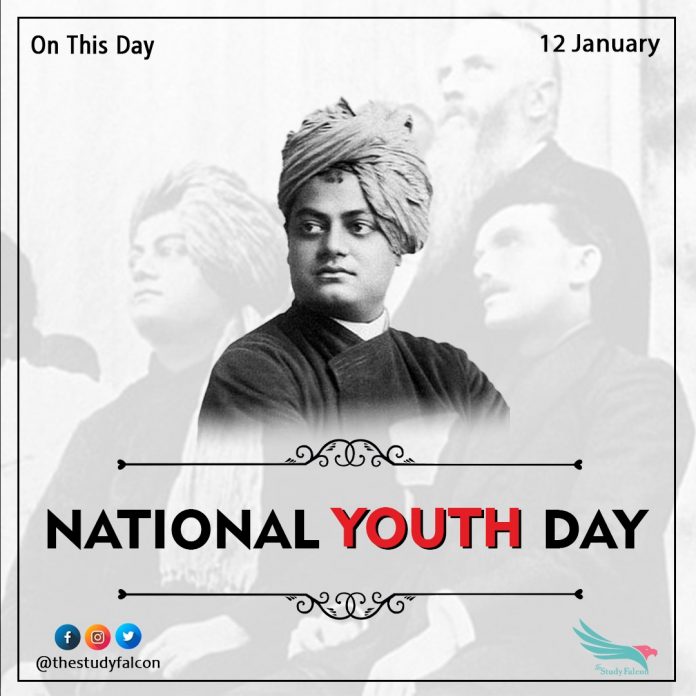 Swami Vivekananda’s lectures and writings, deriving their inspiration from Indian spiritual tradition and the broad outlook of his Master Sri Ramakrishna Paramahansa.

Aim of National Youth Day
National Youth Day is celebrated on January 12, every year in India to honour the birth anniversary of Swami Vivekananda, one of India’s greatest leaders and believers of youth power.

The Day is also celebrated to encourage the youth in the country to become a better person and achieve an honourable life contributing to the development of the country.

History of National Youth Day
Swami Vivekananda was born Narendranath Datta on January 12, 1863, in Kolkata, West Bengal. He was always inclined towards spirituality. He practised meditation from a very early age and also joined the Brahmo Samaj movement for a certain period.

One of the greatest patriots, he was also credited for introducing Indian philosophies of Vedanta and Yoga to the western world, and his famous speech remains as the one that he gave in Chicago in 1893.

In 1984, the Government of India declared this day as National Youth Day and since 1985, India celebrated this event every year.

His message to the youth was, “What I want is muscles of iron and nerves of steel, inside which dwells a mind of the same material as that of which the thunderbolt is made.” Through messages like this, he wished to instil basic values into the youth.

Celebrations
The Day is observed all over India at schools and colleges, with processions, speeches, music, youth conventions, seminars, etc.