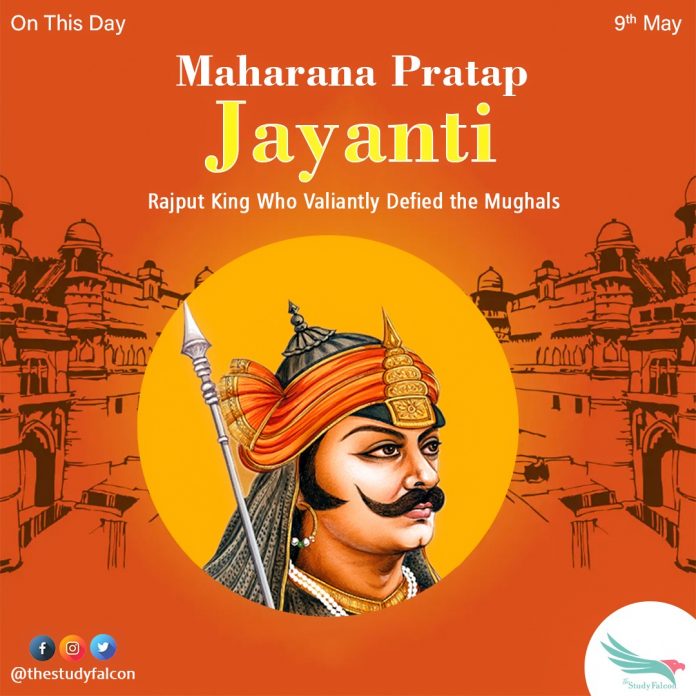 • Maharana Pratap Jayanti, observed on May 9 every year, celebrates the 13th Rajput king of Mewar. Pratap Singh I, who was popularly known as Maharana Pratap, was born on May 9, 1540. This year marks the 480th birth anniversary of Maharana Pratap.
• Born to King Udai Singh II and Queen Jaiwanta Bai, Maharana Pratap ascended to the throne in 1572 after the death of his father.
• The Rajput ruler was thrown into battle almost immediately after his coronation, when the Mughal emperor Akbar came to Mewar to secure a stable route to Gujarat through there. While Akbar offered him a chance to become a vassal, Maharana Pratap refused to surrender to the Mughal ruler. This led to the famous Battle of Haldighati.
• Man Singh I of Amber led Akbar’s forces against Maharana Pratap. Maharana Pratap’s men were outnumbered, and in a fierce 3-hour battle fought in a narrow mountain pass, the Mughals emerged victorious.
• But Mughal’s victory was considered futile, as they failed to capture Maharana Pratap or any other members of the royal family. The Maharana later led resurgence, recovering several territories from the Mughals.
• Maharana Pratap’s horse, Chetak, is known for his loyalty to his master. The horse is said to have a tinge of blue on his coat. Chetak lost his life while jumping across a 21-feet wide river to save his master’s life.
• The celebrated King died at the age of 56 from injuries sustained in a hunting accident on 19 January 1597.