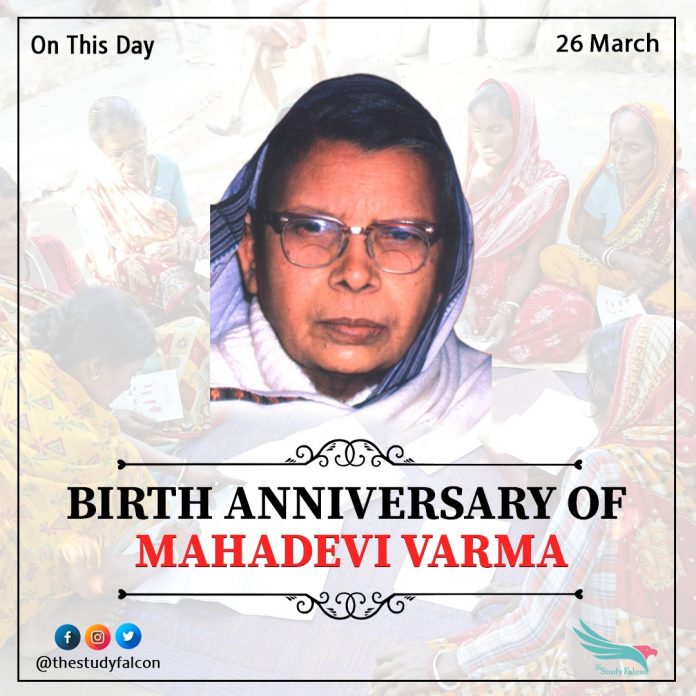 Introduction
Born in 1907, Mahadevi Varma was a transformative poet, essayist, and advocate for women’s rights in India. To commemorate celebrated writer Mahadevi Verma’s deep connection with Bihar and her pioneering work in the realm of women empowerment, some literary figures and culture enthusiasts in the state have decided to honour those who have contributed to the society, with an award named after the great literary figure, on her 114th birth anniversary on March 26.

Early Life
She spent her childhood near the city of Allahabad, where her father was a professor. While both parents encouraged their daughter to pursue her education, it was Varma’s mother who inspired her daughter to write in Sanskrit and Hindi.

While pursuing a master’s degree in Sanskrit, Varma penned her first verses in secret — only to be discovered by her roommate and friend, Subhadra Kumari Chauhan (herself a well-known poet). As modern Hindi became more accepted in literary circles, Varma and Subhadra grew together as writers, reading a loud and publishing their work in the language. Today, Varma is considered one of the foundational poets of the Chhayavad movement in Hindi literature.

Verma, who is also considered one of the pioneers of feminism in the country, is learnt to have spent many of her childhood years at Bhagalpur, where her father taught as a professor in a college.

Her Achievements
Varma’s poignant poetry, and later, essays, often centred on the experience of being a woman. Her feminist work appeared in magazines and books, and her collection of short stories, “Sketches from My Past,” portrays the women she encountered while principal of an all-girls school. While she was a firm supporter of women’s rights, Varma also explored the topics of tradition and the past with great fondness.

Varma received the Jnanpith Award on this date in 1982 for her outstanding contributions to Indian literature.