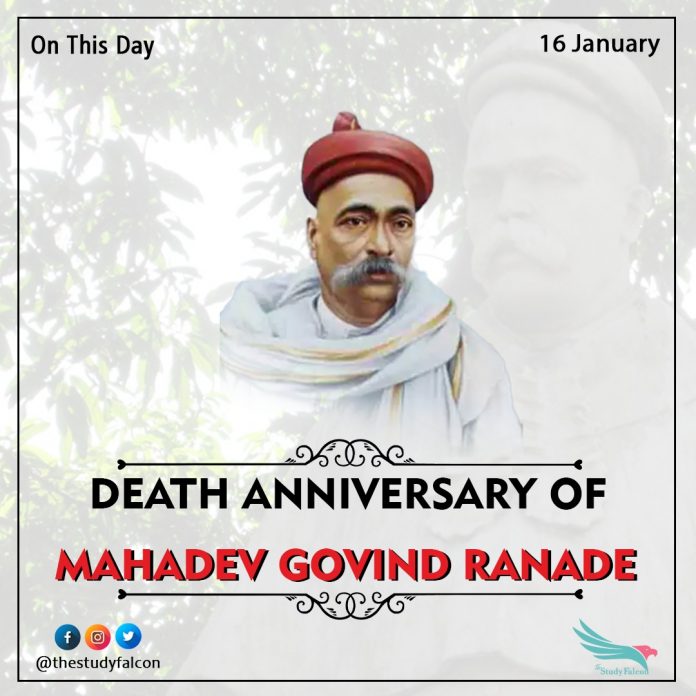 Early life of Mahadev Govind Ranade
Mahadev Govind Ranade was born in Niphad, a taluka town in Nashik district.He studied in a Marathi school in Kolhapur and later shifted to an English-medium school. He obtained a BA degree in 1862 and four years later, obtained his LLB.

Career of Mahadev Govind Ranade
Mahadev Govind Ranade became a subordinate judge in Pune in 1871. He was a social activist deeply influenced by western culture and the colonial state. His activities ranged from religious reform to public education to reform within the Indian family. He summarized the mission of the Indian Social Reform Movement as being to “Humanize, Equalize and Spiritualize”.

He co-founded Prarthana Samaj, a religious society which, while upholding the devotional aspect of Hinduism, denounced and decried many important Hindu social structures and customs.

He campaigned against the ‘purdah’ system.He was a founder of the Social Conference movement, directing against child marriage, the tonsure of Brahmin widows,the caste restrictions on traveling abroad, and he strenuously advocated widow remarriage and female education.

He published many books on Indian economy, most famous being ‘Rise of the Maratha Power’. In 1897, he was appointed member of a committee for tallying national and local expenditure to stabilize financial condition. For hiscontribution to the committee, he was awarded ‘Companion of the Order of the Indian Empire’ (CIE) by the British government.