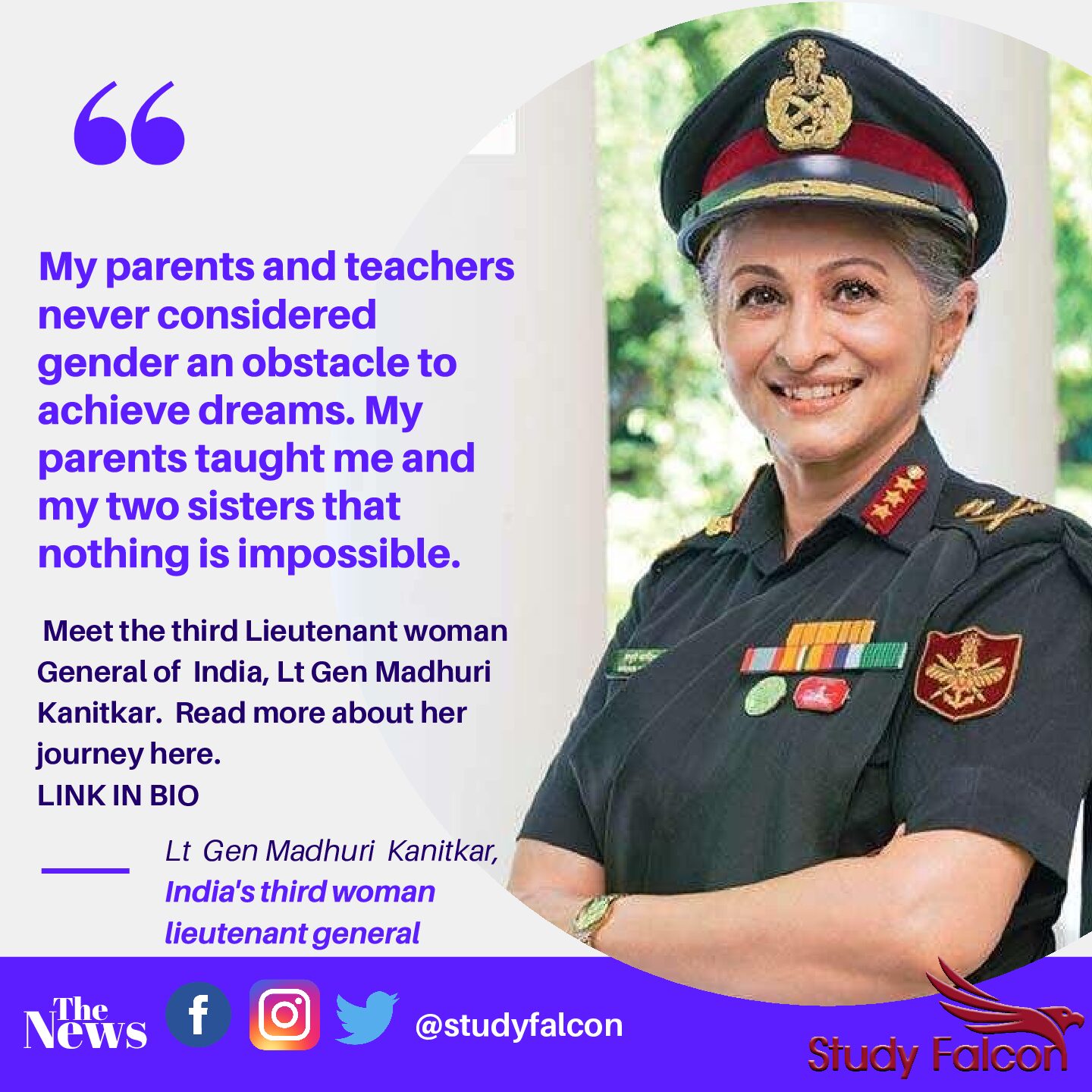 “Gender should not come in the way of their choice of a career. It should be their passion. It is important to introspect, reflect and talk to friends and family to help choose a path. At the same time, once a path is chosen, pursue the journey with dedication, passion and perseverance. There will be difficulties, but it is these very difficulties that make you strong. Whichever career you choose, don’t think yourself any lesser. You do not need to be like a man. You are able and capable as a woman. So, go out with courage, confidence and cheer… every time and anytime”, said by Lt Gen MadhuriKanitkar in an interview with Femina India magazine.

Lt Gen MadhuriKanitkar, a topper at AFMC and winner of the presidential gold medal for the best outgoing student. She completed her post-graduation in paediatrics and training in paediatric nephrology at AIIMS, one of the reputed medical institutes of India. Kanitkar is also a member of the Prime Minister’s scientific and technical advisory board as well as the first trained paediatric nephrologist of the armed forces.Kanitkar, who single-handedly set up units to monitor kidney ailments in children in Pune and Delhi, had returned to her alma mater in 2017, AFMC, as its first woman dean.After completing more than two years as dean of AFMC in Pune, Kanitkar had last year taken the responsibility as Major General Medical, Udhampur.

Lt Gen Punita Arora was the first woman in the country to be the second-highest rank of Lieutenant General in the armed forces. And PadmavathyBandopadhyay is the first woman Air Marshal of the Indian Air Force and the second woman in the armed forces to be promoted to the three-star rank.Lt Gen MadhuriKanitkar is the third women lieutenant general, in the history of India and has broken several gender-based stereotypes of the society, time and again. Serves them just right! And she has not only taken great strides in being on the forefront of the battlefield but also gracefully playing the role of a teacher and a doctor as well. She said, “My parents and teachers never considered gender an obstacle to achieve dreams. My parents taught me and my two sisters that nothing is impossible”.

Speaking of society-perceived stereotypes, one of those has been that the armed forces are male-dominated and was also depicted such in Netflix latest web series starring Jhanvi Kapoor playing the character of GunjanSaxena: The Kargil Girl of India. However, Lt Gen Kanitkaris quick in debunking that myth, she said, “The armed forces predominantly have male workers, but not dominated by gender stereotypes. All my roles, be it a soldier, a teacher, a doctor or for that matter, my appointment today as Deputy Chief Integrated Defence Staff (Medical) has nothing to do with gender”. She also mentioned that she cannot remember a single instance where she had to fight for her ‘rights’ on grounds of gender to which she added, “Any person that’s required to wear multiple hats needs to be tough to scale the heights of success. The journey itself has thrown up many challenges and turning them into opportunities has helped me grow as an individual.”

What are Shadow entrepreneurs?