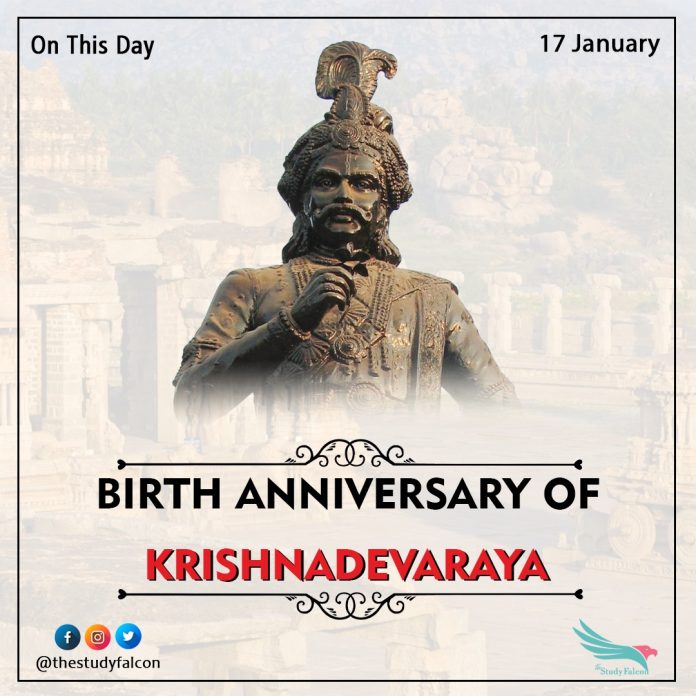 Krishnadevaraya was an emperor of the Vijayanagara Empire, who reigned from 1509 to 1529. He was the third ruler of the Tuluva Dynasty. He ruled the largest empire in India after the decline of the Delhi Sultanate.

He became the dominant ruler of the peninsula by defeating the sultans of Bijapur, Golconda, the Bahmani Sultanate and the Gajapatis of Odisha, and was one of the most powerful Hindu rulers in India.

The raid and plunder of Vijayanagar towns and villages by the Deccan sultans came to an end during the Raya’s rule. In 1509, Krishnadevaraya’s armies clashed with them and Sultan Mahmud was defeated. He established friendly relations with the Portuguese in Goa in 1510.

Literature during reign of Krishnadevaraya

The rule of Krishna Deva Raya is particularly known as a golden age of Telugu literature. Eight Telugu poets were regarded as eight pillars of his literary assembly and known as Ashtadiggajas. Krishna Dev Raya himself composed an epic Telugu poem Amuktamalyada.

AllasaniPeddana is considered to be the greatest and given the title of Andhra Kavita Pitamaha (the father of Telugu poetry).

Art &Culture during reign of Krishnadevaraya

Krishna Deva Raya rebuilt the Vithalaswamy temple and the Hazar Rama Temple in the Hoysala style of architecture&gave land grants to the temples of Tirumala, Srisailam, Amaravati, Chidambaram, Ahobilam, and Tiruvannamalai.

He also contributed in building parts of the Srisailam temple complex where he had rows of mandapas built.