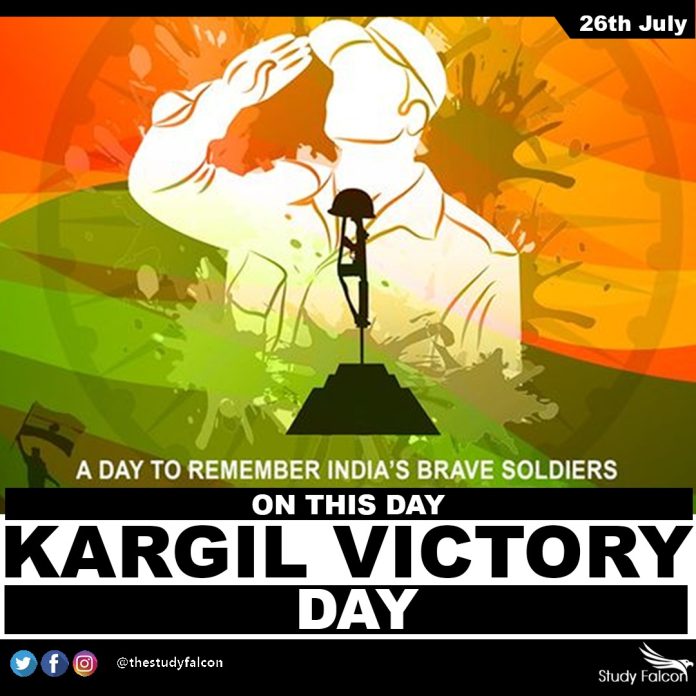 • Kargil Vijay Diwas is celebrated on 26th July every year in honour of the Kargil War Heroes.
• The Kargil war broke out in May 1999 and continued till 26th July 1999.
• On 3rd May 1999, local shepherds first reported the presence of Pakistani infiltrators in District Baltistan, in the Ladakh region.
• On 5th May,the Indian army sent patrol units along to the area, five soldiers were captured including Captain Saurabh Kalia and was tortured to death.
• On 9th May, Heavy shelling by the Pakistan Army damaged Indian ammunition dumps in Kargil.
• Infiltrations occurred in the Dras, Mushkoh and Kaksar sectors.
• The Indian Army moved its troops from the Kashmir Valley to the Kargil sector during the middle of May.
• The Indian Air Force also engaged the infiltrators in May and launched Operation Safed Sagar in support of the mobilisation of Indian land forces on 26 May.
• The Indian Navy also prepared to blockade the Pakistani ports to cut off supply routes under Operation Talwar.
• Indian Army released documents that confirmed the involvement of the Pakistani army.
• On 4th July, the Indian army captured Tiger Hill after a battle that lasted 11 hours. The next day, India recovered Drass.
• On 11th July Pakistani forces disengaged from the region; India retook key peak points in Batalik.
• The then Prime Minister Vajpayee announced that Operation Vijay (the codename given to the Kargil War) was a success.
• The war officially came to an end on 26th July,all Pakistani intruders are evicted from Indian soil.
• The G8 countries, the ASEAN, the USA and the EU supported India in the conflict.
• India was also praised for showing amazing restraint by not crossing the LOC and escalating the situation into an all-out war between two nuclear states.
• Functions are also organized all over the country to commemorate the contributions of the armed forces.