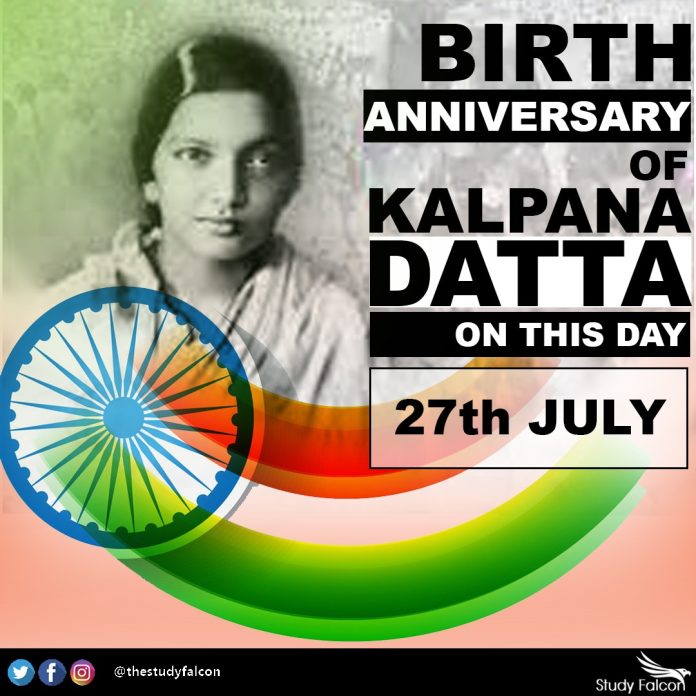 • Kalpana Datta was born in a Baidya family at Sripur, a village of Chittagong District in the Bengal Province of British India on 27th July.
• Kalpana Datta was an Indian independence movement activist and a member of the armed independence movement led by Surya Sen, which carried out the Chittagong armoury raid in 1930.
• In September 1931, Surya Sen entrusted Kalpanato attack the European Club in Chittagong. But a week before the attack, she was arrested while carrying out reconnaissance of the area.
• Kalpana went underground after her release on bail. She was finally arrested on 19 May 1933.
• In the second supplementary trial of the Chittagong armoury raid case, Kalpana was sentenced to transportation for life. She was released in 1939.
• Kalpana graduated from Calcutta University in 1940 and joined the Communist Party of India.
• Kalpana served as a relief worker during the 1943 Bengal famine and the Partition of Bengal.
• Kalpana wrote an autobiographical book in Bengali which was translated into English by Arun Bose & Nikhil Chakraborty and was published in English in October 1945.
• Kalpana joined the Indian Statistical Institute where she worked until her retirement.
• Kalpana died in Calcutta on 8 February 1995.
• In 2010, a movie named ‘Khelein Hum JeeJaanSey’, which dealt with the Chittagong armoury raid and its aftermath was released to remember Kalpana’s work.