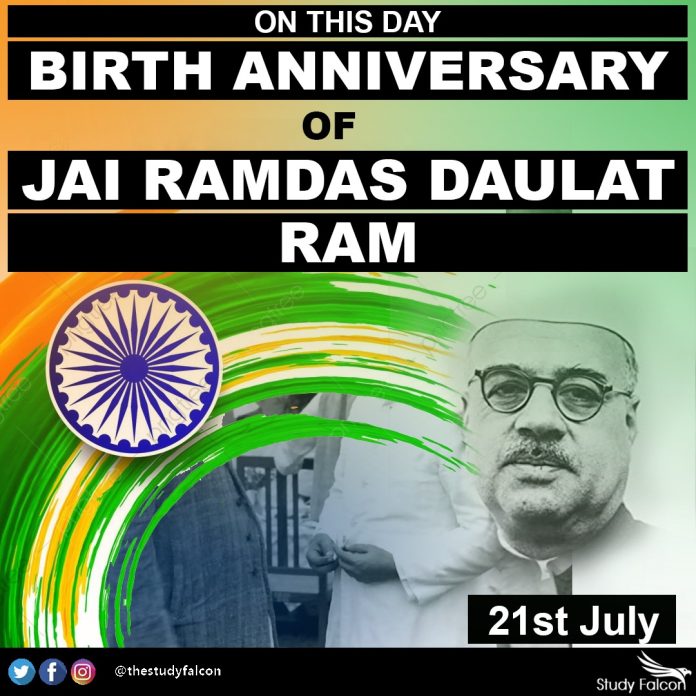 • Jairamdas Daulatram was born into a Sindhi Hindu family in Karachi, Sindh, on 21 July 1891.
• Daulatram completed his law degree but soon gave it up as it often led to conflict with his conscience.
• In 1915, Daulatram came into personal contact with Mahatma Gandhi and became his devotee.
• He demanded ‘Home Rule’ and Dominion status for India by participating in the Home Rule Movement.
• Daulatram also joined the Indian National Congress, which was the largest Indian political organisation.
• Daulatram participated in the Non-cooperation movement (1920–1922), against British rule.
• Daulatram was a leading activist in the Salt March (1930–31) and the Quit India movement (1942–45).
• He was shot and wounded in the thigh when police opened fire on street protestors agitating outside a magistrate’s court in Karachi in 1930.
• He stayed in India during the partition and was appointed the first Indian Governor of Bihar.
• He represented a constituency from East Punjab in the Constituent Assembly of India and contributed to drafting and shaping the Constitution of India.
• From 1950 to 1956, Daulatram served as the Governor of Assam.
• Daulatram was one of the founding members of the Akhil Bharat Sindhi Boli Ain Sahit Sabha (All India Sindhi Language and Literature Congress).
• In 1957, Daulatram chaired a convention to demand the recognition of Sindhi under the Eighth Schedule of the Indian Constitution.
• Daulatram passed away on 1st March 1979.