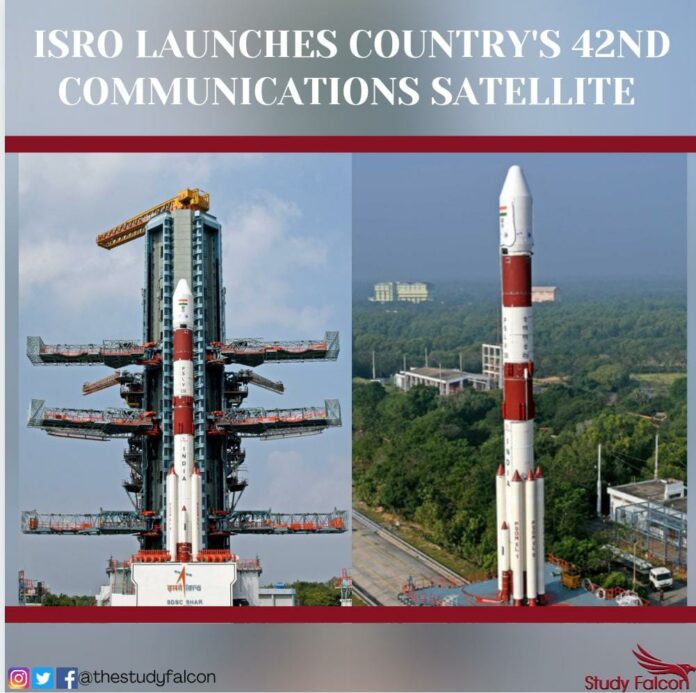 The Indian Space Research Organisation (ISRO) recently announced that its PSLV-C50 rocket has successfully placed communication satellite CMS-01 into orbit. ISRO successfully launched its 42nd communication satellite CMS-01 on 17 December 2020. It lifted off into the cloudy skies from the Second Launch Pad (SLP) of Satish Dhawan Space Centre at Sriharikota. Initially scheduled to launch on 8 December and again to 14 December, it was pushed back due to bad weather and the possibility of hurricanes. This is the second ISRO launch taking place amid the Coronavirus pandemic. First launch was of EOS-01 which is an earth observation satellite that will provide agriculture, forestry and disaster management support.

Specifications of the PSLV-C50 CMS-01 mission-

PSLV-C50 lifted off from the Second Launch Pad of SDSC SHAR at 15:41 hours (IST). After a flight of about 20 minutes 12 seconds, the vehicle injected the satellite into its intended orbit as planned. After injection, the solar panels of CMS-01 were automatically deployed and ISRO’s Master Control Facility at Hassan has assumed the control of the satellite. In the coming days, orbit raising manoeuvres will be executed to position the satellite in the Geostationary Orbit at its designated location. The satellite will be handed over to the users for communication services after completion of the payload In-orbit testing in the first week of January 2021.

ISRO Chairman Dr K Sivan appreciated the tireless efforts of both the satellite and launch vehicle teams in realising this mission amidst the COVID-19 pandemic. Talking about the upcoming PSLV-C51 mission, Dr K Sivan said “The mission will be fruition of the space reforms recently introduced in the country.” Further he added that the mission will carry three satellites built by private entities.

About the Polar Satellite Launch Vehicle :-