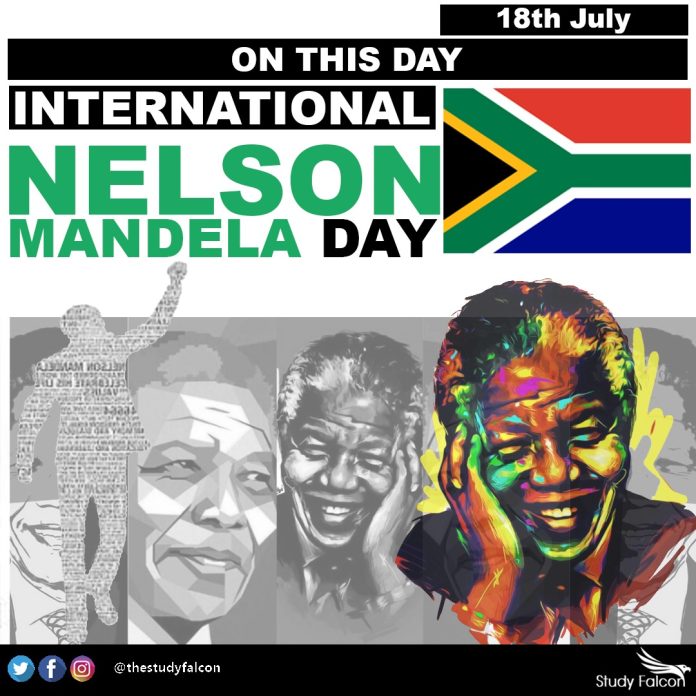 • Nelson Mandela International Day (or Mandela Day) is celebrated annually on 18th July in the recognition of the contributions made by Nelson Mandela.
• Nelson Mandela was a South African anti-apartheid revolutionary, political leader and philanthropist who served as President of South Africa from 1994 to 1999.
• In November 2009, the United Nations General Assembly formally declared 18 July to be “Nelson Mandela International Day” through the resolution A/RES/64/13.
• UNGA recognized Mandela’s values and his dedication to the service of humanity in conflict resolution; race relations; promotion and protection of human rights.
• The resolution also acknowledged his contribution to the struggle for democracy internationally and the promotion of a culture of peace throughout the world.
• In 2014, the UN General Assembly established the Nelson Mandela Prize, a quinquennial award recognizing the achievements of those who dedicated their lives to the service of humanity.
• In December 2015, the UNGA decided to extend the scope of Nelson Mandela International Day to also be used to promote humane conditions of imprisonment.
• UNGA adopted A/RES/70/175 the revised United Nations Standard Minimum Rules for the Treatment of Prisoners and approved that they should be known as the “Nelson Mandela Rules.”
• To raise awareness about prisoners being a continuous part of society, and to value the work of prison staff as a social service of particular importance.