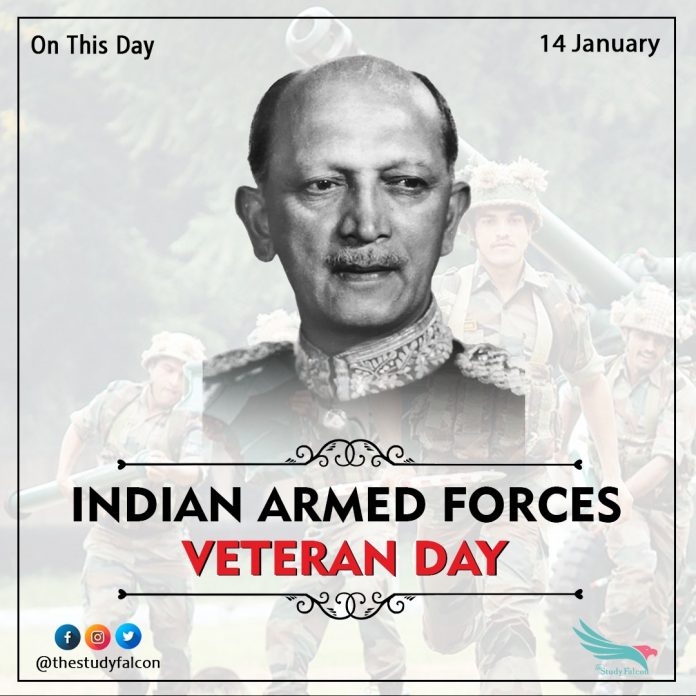 Every year, Indiacelebrates the Armed Forces Veterans Day as a mark of respect to Field Marshal KM Cariappa.
Various ceremonies and welfare measures undertaken on this day by the Indian Army.

Aim of Indian Armed Forces Veteran Day
The day is observed as a mark of respect and recognition of the services rendered by Field Marshal KM Cariappa OBE, the first Indian Commander-in-Chief of the Indian Armed Forces who retired on 14 January 1953.

The first Armistice Day was celebrated on November 11, 1919, marking the anniversary of the end of World War I. However, in India, Congress first announced this day through a resolution passed in 1926.

In 1954, the Armistice Day was changed to Veterans Day to honour the living legends of all wars.

The Day is celebrated from 2017. Every year, January 14 is marked as the Armed Forces Veteran Day as the Field Marshal KM Cariappa, the first Commander-in-Chief of Indian Armed Forces retired on the day.

Celebrations of Indian Armed Forces Veteran Day
‘Wreath Laying Ceremonies and Veteran’s Meets’ are organised in various Military Stations to mark the solidarity towards the Next of Kin (NoK) of our veterans as a mark of respect to their selfless duty and sacrifices towards the Nation.