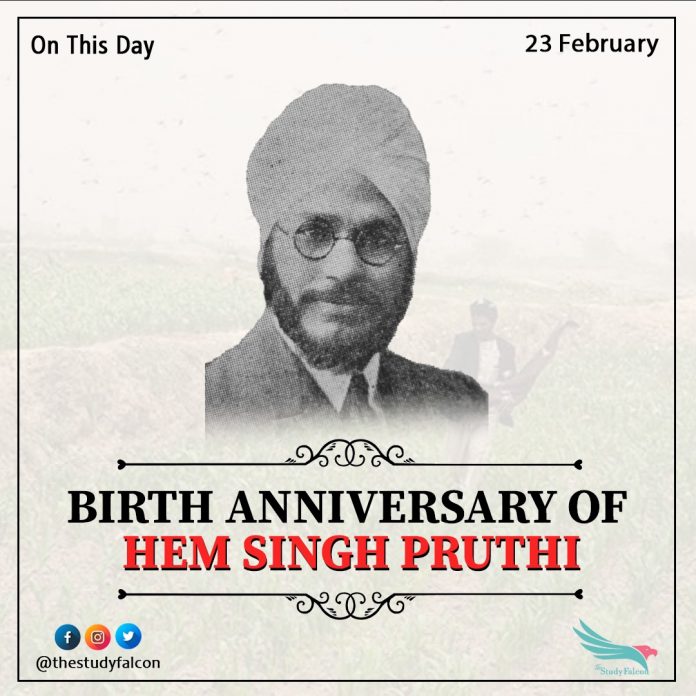 Who was Hem Singh Pruthi?
Hem Singh Pruthi (23 February 1897 – 23 December 1969) was an Indian entomologist who served as Imperial Entomologist, being the first native Indian in that position.

Early life of Hem Singh Pruthi
He was born at Begowala, Sialkot where his father Dr Bhagat Singh Pruti worked in the Police and Jail Hospital at Gujranwala. He studied locally and completed his MSc at the Government College in Lahore and joined Peterhouse, Cambridge, where he was a Charles Abercrombie Smith Student and obtained a Ph.D. in 1924.Pruthi received an Sc.D. from the University of Cambridge in 1943.

Dr Pruthi’s major contribution for Indian Agriculture and farmers was his sincere fight against desert locust. He waged a relentless war against this migratory international pest whose damage potential surpass all the known insect pests.

In 1950, he published The Desert Locust Cycle of 1940-46 in India, its Progress and Control. A monumental work which included several new information on locust ecology and swarm migration to India in relation to meteorology. He also authored the publication Textbook of Agricultural Entomology (ICAR).

Pruthi was responsible for organizing several entomological establishments of the Government of India. He served as Member of the INSA Council (1945-56, 1953-54, 1956) and was Chief Editor of the Indian Journal of Entomology.