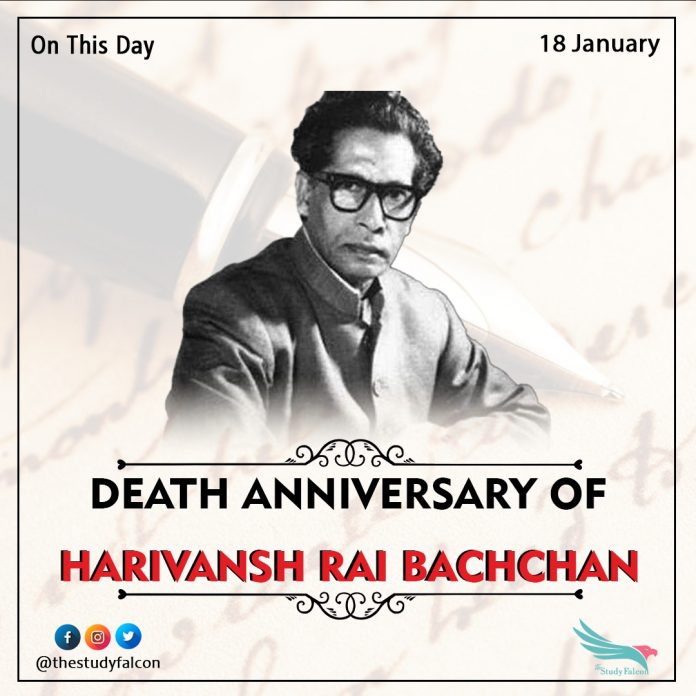 Early life of Harivansh Rai Bachchan
Bachchan was born in Allahabad United Provinces of Agra and Oudh in British India on 27 November 1907 into an Awadhi Hindu Kayastha family.

From 1941 to 1957, he taught in the English Department at the Allahabad University and after that, he spent the next two years at St Catharine’s College, Cambridge University completing a PhD on W.B. Yeats.

He began using the pen name “Bachchan” (meaning child) instead of Shrivastava when he wrote Hindi poetry.

Writing career of Harivansh Rai Bachchan
Harivansh Rai Bachchan was fluent in several Hindi languages (Hindustani, Awadhi). His poetry is noted for its lyrical beauty and rebellious attitude with imagery that is unfettered and sensuous that placed him in a different league from his contemporaries in the Chhayavaad movement.

Harivansh Rai Bachchan is best remembered for his 142-verse lyrical poem “Madhushala” (The House of Wine), published in 1935. In 1969, he published the first of his four-part autobiography ‘Kya bhooloonkyayaadkaroon’. The second part ‘Need ka nirmaan fir’ was published in 1970, the third ‘Basere se door’ in 1977 and the last part ‘Dashdwaar se sopaantak’ in 1985.

Bachchan published about 30 poetry collections as well as other works in Hindi like essays, travelogues and a few songs for the Hindi film industry.

He was also awarded the Sovietland Nehru Award. The Uttar Pradesh government conferred him the “Yash Bharati” Samman in 1994. A postage stamp was released in 2003 in his memory.