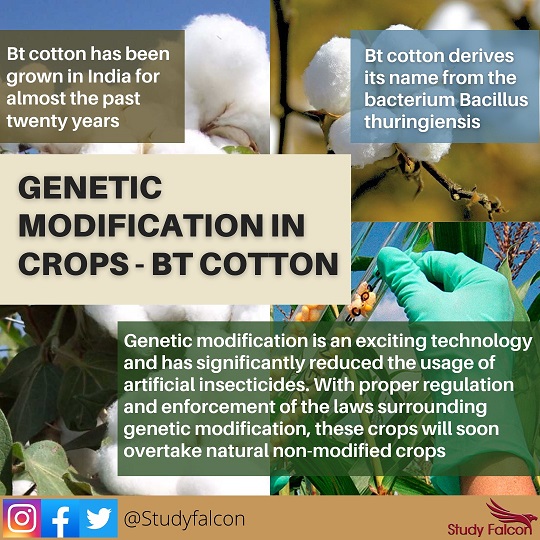 The concept of genetic modification in crops is not something new. Genetic engineering and plant transformation have played a crucial role in the production of superior quality crops by introducing foreign genetics and boosting those qualities that are beneficial to us. For example, genetic modification allows us to remove the seeds from certain fruits and vegetables, making it more convenient for consumption, reducing waste generation and offering more value at the same weight.

WHAT IS GENETIC MODIFICATION?

This idea was introduced in the United States in the mid-90s. Most current GM crops grown in the U.S. are engineered for insect resistance or herbicide tolerance. Corn, soybeans, and cotton are the three largest acreage GM crops.

The term “genetic modification” is used to refer to a series of laboratory techniques used to transfer genes between organisms for the purposes of cloning genes, splicing DNA segments together, and inserting genes into cells. To produce a GM plant, new DNA is transferred into plant cells. Usually, the cells are then grown in tissue culture where they develop into plants. The seeds produced by these plants will inherit the new DNA. As a whole, these techniques are called Recombinant DNA Technology or RDT. Other terms used for GM plants or foods derived from them are genetically modified organism (GMO), genetically engineered (GE), bio-engineered, and transgenic.

Genetic modification of plants involves adding a specific stretch of DNA into the plant’s genome, giving it new or different characteristics. This could include changing the way the plant grows, or making it resistant to a particular disease. The new DNA becomes part of the GM plant’s genome which the seeds produced by these plants will contain. Insect-resistant crops contain genes from the soil bacterium Bacillus thuringiensis (Bt). The protein produced in the plant by the Bt gene is toxic to a targeted group of insects, but not to mammals.

WHAT IS BT COTTON AND HOW IS IT PRODUCED?

An important type of GM crop, Bt cotton derives its name from the bacterium Bacillus thuringiensis, or as it is commonly called, Bt. Bt cotton is a genetically modified organism (GMO) or genetically modified pest resistant plant cotton variety, which produces an insecticide to combat bollworm. Strains of the bacterium Bacillus thuringiensis produce over 200 different Bt toxins, each harmful to different insects. Most notably, Bt toxins are insecticidal to the larvae of moths and butterflies, beetles, cotton bollworms and ghtu flies but are harmless to other forms of life. The Bt toxin gene coding has been incoporated into the cotton crop as a transgene, which gives the crop the ability to produce natural insecticides in its tissue. In many regions, the main pests in commercial cotton are lepidopteran larvae, which are killed by the Bt protein in the genetically modified cotton they eat. This eliminates the need to use large amounts of broad-spectrum insecticides. However, this Bt toxin genetic modification is not a miracle cure against all kinds of pests – Bt cotton is ineffective against many cotton pests such as plant bugs, stink bugs, and aphids. A 2006 study done by Cornell researchers, the Center for Chinese Agricultural Policy and the Chinese Academy of Science on Bt cotton farming in China found that after seven years these secondary pests that were normally controlled by pesticide had increased, necessitating the use of pesticides at similar levels to non-Bt cotton and causing less profit for farmers because of the extra expense of GM seeds.

Delta endotoxins, or endotoxins in general, are pore-forming toxins that are produced by Bt bacteria. During spore formation the bacteria produce crystals of such proteins (hence the name Cry toxins). During the production of Bt cotton, genes encoding toxin crystals in the Cry group of endotoxin are added to the genetic structure of natural cotton. When insects attack and eat the cotton plant the Cry toxins or crystal protein are dissolved due to the high pH level of the insect’s stomach. The dissolved and activated Cry molecules bond to cadherin-like proteins on cells comprising the brush border molecules. The Cry toxin molecules attach themselves to specific locations on the cadherin-like proteins present on the epithelial cells of the midge and ion channels, which then allows the flow of Potassium. Regulation of potassium concentration is essential and, if left unchecked, causes death of cells. Due to the formation of Cry ion channels sufficient regulation of potassium ions is lost and results in the death of epithelial cells, essentially killing off the pests.

THE HISTORY BEHIND BT COTTON

THE VARIOUS ADVANTAGES OF BT COTTON

Apart from the very obvious advantage of resistance against particular types of pests, the usage of Bt cotton brings other auxiliary advantages to cotton crop cultivation as well. Primarily, the yield is increased due to an inherent resistance of Bt cotton against American, Spotted and Pink bollworms. This in turn also leads to a reduction in insecticide usage in the cultivation of Bt cotton in which bollworms are the major pests, cost of cultivation (depending on seed cost versus insecticide costs) and in the number of predators which help in controlling the bollworms by feeding on larvae and eggs of bollworm. The reduction in the usage of artificial insecticides in turn lead to a reduction in health hazards due to rare use of insecticides.

The main selling points of Bt cotton are the reductions in pesticides to be sprayed on a crop and the ecological benefits which stem from that. China first planted Bt cotton in 1997 specifically in response to an outbreak of cotton bollworm, Helicoverpa armigera, that farmers were struggling to control with conventional pesticides. Studies showed that the lower levels of pesticide being sprayed on the cotton crops promoted biodiversity by allowing non-target species like ladybirds, lacewings and spiders to become more abundant.

Bt cotton is supplied in Maharashtra by the agri-biotechnology company Maharashtra Hybrid Seeds Co, also known as, Mahyco. It is one of the country’s major producers of seed. As of 2015, the company was also active in Vietnam, Indonesia, Philippines and Bangladesh, and planned expansion to Africa. Through a joint venture with Monsanto named Mahyco Monsanto Biotech, Mahyco sublicenses Bt cotton technology in India. The Monsanto Company was an American agrochemical and agricultural biotechnology corporation founded in 1901. As of the present day, Mahyco is present in over 20 countries, with offices in Singapore, Vietnam and recently acquired a controlling stake in Quton, the largest Cotton seeds company in Africa.

India’s success in producing large quantities of Bt cotton have not been without shortcomings, however.  Monsanto’s seeds are expensive and lose vigour after one generation, prompting the Indian Council of Agricultural Research to develop a cheaper Bt cotton variety with seeds that could be reused. This variety showed poor yield and was promptly removed within a year. This variety of Bt cotton also contained a DNA sequence owned by Monsanto, prompting an investigation. In parts of India cases of acquired resistance against Bt cotton have occurred in the past. Monsanto has admitted that the pink bollworm is resistant to first generation transgenic Bt cotton that expresses the single Bt gene.

The state of Maharashtra banned the sale and distribution of Bt cotton in 2012, to promote local Indian seeds, which demand less water, fertilizers and pesticide input, but lifted the ban in 2013. The Punjab Agricultural University(PAU) has successfully developed the country’s first Bt cotton varieties. ICAR has identified three varieties, namely PAU Bt 1, F1861 and RS 2013, for cultivation in Punjab, Haryana, Rajasthan, which is a cheaper alternative to Bt cotton hybrid seed.

The development and production of genetically modified crops have been mired in controversy for a long time now. In India, Bt cotton has been heavily criticized due to its supposed failure to reduce the need for pesticides and increase yield. The link between the introduction of Bt cotton to India and a surge in farmer suicides has been refuted by other studies, with decreased farmer suicides since Bt cotton was introduced. In Hawaii, growing GMO cotton has been prohibited since 2013. Transgenic cotton is also banned in some parts of Florida. Burkina Faso, Africa’s top cotton producer, banned GM cotton in 2016, because of economic and quality concerns.

Despite the shortcomings that GM crops have and the various controversies surrounding this technique, genetic modification is an exciting technology and has significantly reduced the usage of artificial insecticides, which in turn improves crop quality and does not harm the environment. With proper regulation and enforcement of the laws surrounding genetic modification, these crops will soon become much more common and overtake natural non-modified crops, albeit in a way that ensures that farmers are able to retain their livelihoods and large corporations do not engage in fraudulence.