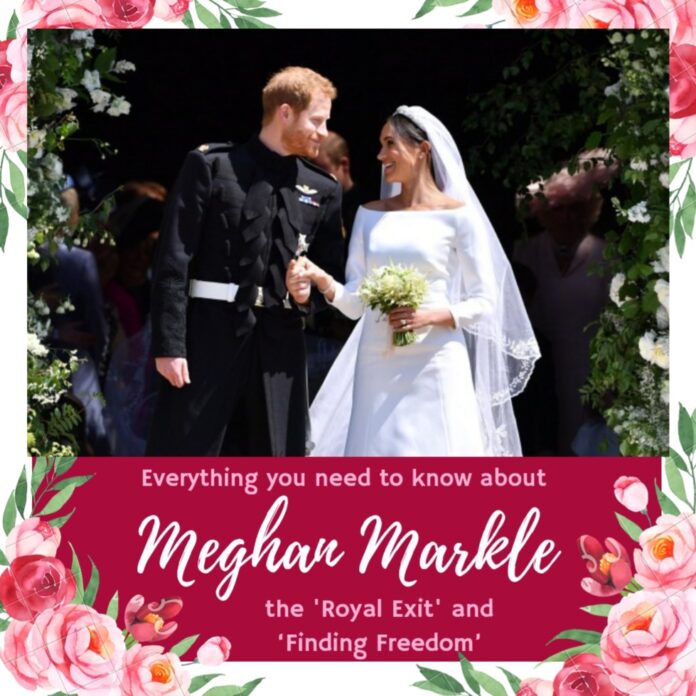 Prince Harry and Meghan Markle’s relationship isn’t exactly typical. Meghan was already a Hollywood star but her status as a boundary-breaking royal took her and Harry into another level of fame. Of course, we all know how the story goes, they met, they fell in love, had a fairytale wedding (complete with two gowns), a baby came and then… a scandalous royal exit and move to Canada.

Of course, there was a lot that happened in between so let’s breakdown the relationship from 2016 until now.

According to Markle’s Vanity Fair Story, the couple had been together for half a year before their relationship was announced. She said, “We were very quietly dating for about six months before it became news, and I was working during that whole time, and the only thing that changed was people’s perception. Nothing about me changed. I’m still the same person that I am, and I’ve never defined myself by my relationship”. Given their relationship first became news in late October, let’s consider their first date around April 2016, give or take.

Later around November 2016, Harry himself confirms their relationship in a rare statement, released by Kensington Palace, asking for the media to leave his girlfriend alone. “Since he was young, Prince Harry has been very aware of the warmth that has been extended to him by members of the public,” the statement began. “He feels lucky to have so many people supporting him and knows what a fortunate and privileged life he leads.”

Well, as the couple were taking major steps in their relationship, another bomb was dropped when in September 2017, Us Weekly reports reported that Markle has met Queen Elizabeth leading to even more buzz about a possible engagement around the corner. The lovebirds have been staying with Prince Charles and Camilla, Duchess of Cornwall, and decided to pay the Queen a visit in nearby Balmoral, Queen Elizabeth’s summer residence. While rumours of the engagement announcement before Christmas continued to swirl, a new report suggested that they may have to wait for Kate Middleton to give birth to her third child in April. “There won’t be any announcement until at least after Kate has had her baby in April,” a palace source told the Daily Beast, mentioning that the two may want to live together for as long as a year before getting engaged.

Markle is supposedly set to move to London in November after wrapping up her show Suits for good, and she plans to move in with Prince Harry upon arrival.

And finally, the big day happened on May 19, 2018, when Meghan and Harry were married at St. George’s Chapel in Windsor Castle in front of 600 friends, family, royals, and Beckhams. Queen Elizabeth II gifted Harry a new title that morning, Duke of Sussex, and Meghan became the Duchess of Sussex as soon as they made things official at the altar.

First comes love, then comes marriage, and, according to that nursery rhyme, a baby is a next step — which is what happened when Meghan and Harry announced that they’d be expecting their first child together in the Spring of 2019. And so, Archie Harrison Mountbatten Windsor, or Archie, as the entire world would come to know him, arrives in the early morning on May 6th, 2019.

There were reports of Queen Elizabeth rejecting Meghan’s first-choice tiara but it seems that it was just a misunderstanding or so the Royal Family clarifies. On her wedding day, Meghan Markle wore the famed Queen Mary Bandeau tiara. The storied piece of Jewelry was given to Queen Mary by the County of Lincoln back in 1893 when she married then-Prince George. Meghan and Queen Elizabeth picked the piece out together for Meghan’s big day, but several British tabloids claim that there was a rift between the two because of the tiara. However, Royal experts and the new book, Finding Freedom: Harry and Meghan and the Making of a Modern Royal Family, refute the claims, saying that Meghan got Queen Elizabeth’s blessing and that there were no issues regarding the tiara at all.

The story goes like this, according to Scobie and Durand, the royal press corps. Harry was frustrated because he was dealing with the queen’s dresser, Angela Kelly. She was in charge of getting the tiara to Meghan in time for a pre-wedding hair trial and she was taking her time in doing so. Queen Elizabeth didn’t have any qualms over the choice of tiara or the hair trial.

“After many months of reflection and internal discussions, we have chosen to make a transition this year is starting to carve out a progressive new role within this institution. We intend to step back as ‘senior’ members of the Royal Family and work to become financially independent while continuing to fully support Her Majesty, The Queen,” is what they said in their official statement.

The Sussexes issue an official timeline of their transition. The timeline explains that they will be considered “royal” but will not be using Sussex Royal as a brand, which many had speculated. In March, The Sussexes make their first public appearance since their announcement to step back in London at the Endeavor Awards, which marked the start of the couple final royal engagements.

After the shocking announcement, Courtiers and some members of the family held Meghan responsible for the royal exit, but that it was Harry who wanted to part ways. The Authors of Finding Freedom said, “Meghan simply emboldened him to make the change. She supported him no matter what. Fundamentally, Harry wanted out… Deep down, he was always struggling within that world. She’s opened the door for him on that.” The duchess allegedly went to great lengths to fit in with her in-laws and confided in a friend about the frustrations of her inability to do so. According to Scobie and Durand, the royal press corps members, “Meghan tearfully told a friend in March: ‘I gave up my entire life for this family. I was willing to do whatever it takes. But here we are. It’s very sad.'”

Meghan was also devastated by the fact that Harry was stripped of his honorary military appointments upon the couple’s official departure. She reportedly told a friend, “It was so unnecessary… And it’s not just taking something away from him; it’s also that entire military veteran community. You can see how much he means to them, too. So why?” According to some sources, it was “the most demoralizing aspect” of the deal, and that it’s been “a tough pill” for Harry to swallow.

While it hasn’t been easy for Harry to leave life as a royal, he felt he had no other choice in “making things right for his own little family.” “This is tearing him apart. He loves the Queen, but his wife feels aggrieved, and he adores his son,” explained in the book. “Harry’s whole world is Archie.”

The world began to understand Prince Harry and Meghan Markle’s royal exit a little bit better thanks to royal reporters Carolyn Durand and Omid Scobie’s new book Finding Freedom. Among some of the juicier revelations about Markle’s relationship to the Kate Middleton, and how Prince Williams handled their relationship, was a little tidbit about the Duke of Sussexes’ old private Instagram account.

A spokesperson for Meghan and Harry previously said that the two had nothing to do with the book, releasing a statement that reads, “The Duke and Duchess of Sussex were not interviewed and did not contribute to Finding Freedom. This book is based on the authors’ own experiences as members of the royal press corps and their independent reporting.” Finding Freedom will be released on Aug. 11.