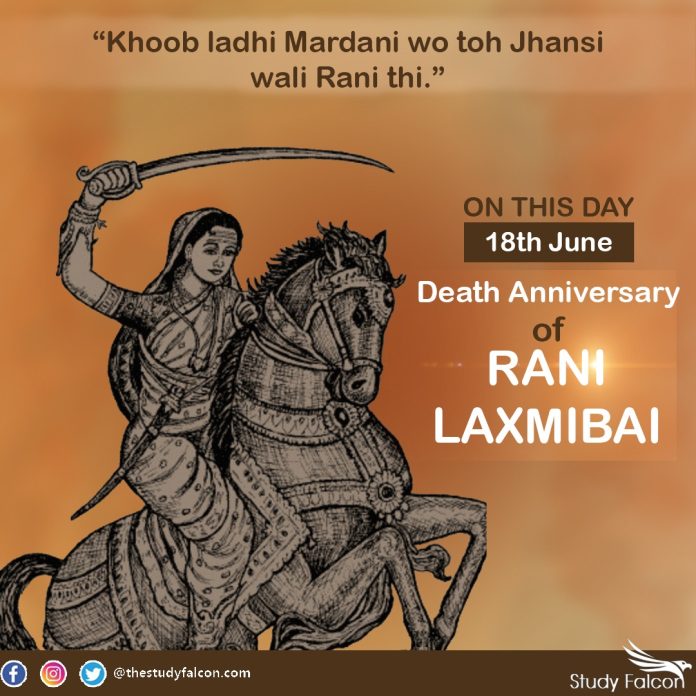 • In 1858, Rani Lakshmibai, also known as the Rani of Jhansi, died fighting British colonial rulers near Gwalior in a place known as Kotah-ki-Serai.
• Lakshmibai was an Indian queen of the Maratha princely state of Jhansi in North India currently present in Jhansi district in Uttar Pradesh, India.
• She was one of the leading figures of the Indian Rebellion of 1857 and became a symbol of resistance to the British Raj for Indian nationalists.
• Rani Lakshmibai was born on November 19, 1828 near Varanasi. Her father Moropant Tambe, who worked for Peshwa Baji Rao II, named her Manikarnika.
• In 1842, Rani Lakshmibai was married to Raja Gangadhar Rao, the King of Jhansi but he died a few years later and she took over as the Rani of Jhansi.
• After the death of the Maharaja in 1853, the British East India Company, under Governor-General Lord Dalhousie, applied the Doctrine of Lapse.
• In March 1854, Rani Lakshmibai was given an annual pension of Rs. 60,000 and ordered to leave the palace and the fort.
• In March 1858, Jhansi came under the siege of the British East India Company forces after a fierce battle.
• Rani of Jhansi along with her soldiers did not concede defeat even after being outnumbered. She continued the battle and fought valiantly till her last breath.
• Several patriotic songs have been written about the Rani. The most famous composition about Rani Lakshmi Bai is the Hindi poem Jhansi ki Rani written by Subhadra Kumari Chauhan.
• A women’s unit of the Indian National Army was named the Rani of Jhansi Regiment. The Indian Coast Guard ship ICGS Lakshmi Bai has been named after her.