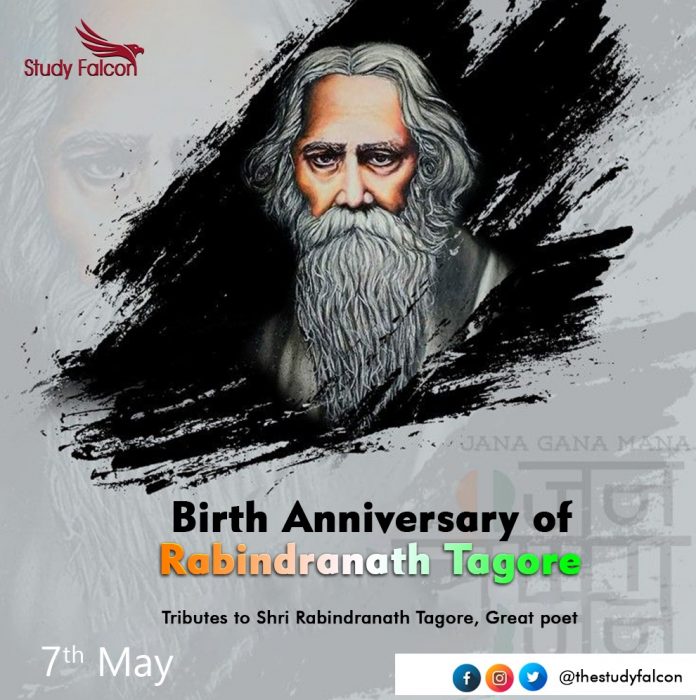 • Rabindranath Tagore was a great scholar, novelist, essayist, song composer and play writer.
• He was born on 7 May, 1861 in a rich Brahmin family in Kolkata (Calcutta) and was the youngest sibling in his family.
• At the age of 8, he started writing poems and by the age of sixteen he also started composing art works and started publishing his poems under the pseudonym Bhanusimha.
• In 1877 he wrote short story ‘Bhikharini’ and in 1882 the collection of poems ‘Sandhya Sangit‘.
• He was influenced by the classical poetry of Kalidasa and started writing his own classical poems.
• His traditional education began in Brighton, East Sussex, England, at a public school. In 1878, he went to England to become a barrister to fulfill his father’s wish.
• He also learned the essence of English, Irish and Scottish literature and music; he returned to India and married Mrinalini Devi.
• His father bought a huge land for meditation and named it as Shantiniketan. Debendranath Tagore founded an ‘Ashram’ in 1863.
• In 1901, Rabindranath Tagore established an open-air school. It was a prayer hall with marble flooring and was named as ‘The Mandir’.
• In 1913, he gained recognition and was awarded the prestigious Nobel Prize in Literature and became Asia’s first Nobel Laureate. Now, Shantiniketan is a famous University town in West Bengal.
• He established the Visva Bharati University in West Bengal. It consists of two campuses one at Shantiniketan and the other at Sriniketan.
• His compositions were chosen by two nations as national anthems: India’s “Jana Gana Mana” and Bangladesh’s “Amar Shonar Bangla”.The Sri Lankan national anthem was inspired by his work.
• He spent his last years in severe pain and even in 1937, he went into a comatose condition. After lot of suffering, he died on 7 August, 1941 in the Jorasanko mansion in which he was brought up.