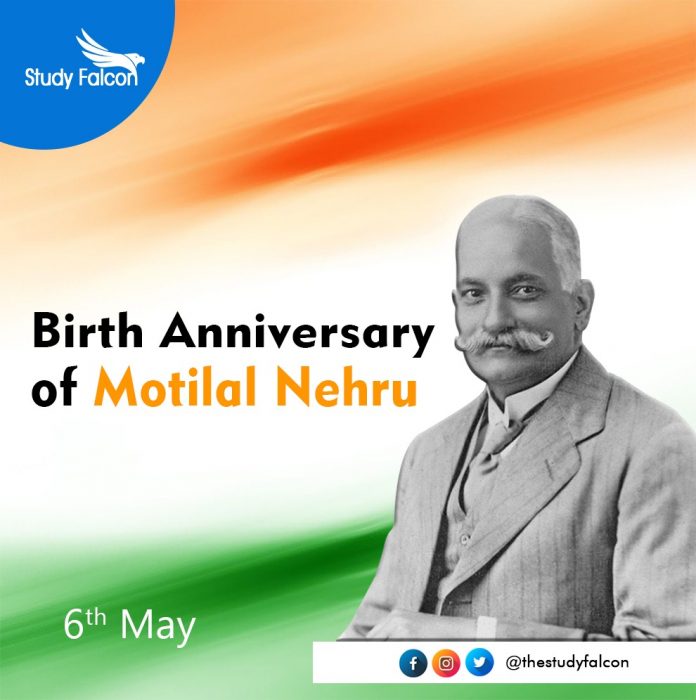 • Pandit Motilal Nehru was born on May 6, 1861 to Gangadhar Nehru, who died three months prior to his birth. His father was a Kotwal in Delhi during Bahadur Shah Zafar’s rule but when the Revolution of 1857 took place, he left Delhi and moved to Agra where Motilal was born.
• He was a leader of the Indian independence movement, cofounder of the Swaraj (“Self-rule”) Party, and the father of India’s first Prime Minister, Jawaharlal Nehru.
• He took his education from the University of Cambridge where he graduated with a Law degree, becoming one of the first Indians to get ‘Western education’.
• Motilal, a member of a prosperous Brahman family of Kashmiri origin, early established a lucrative law practice and started his career by practicing as a lawyer in Kanpur and was later admitted to the Allahabad High Court in 1896.
• He shunned politics until middle age, when, in 1907, at Allahabad, he presided over a provincial conference of the Indian National Congress (Congress Party), a political organization striving for dominion status for India.
• He was considered a moderate leader until 1919, when he made his newly radicalized views known by means of a daily newspaper he founded, The Independent.
• He served as the President of Congress twice; he became the President of the Indian National Congress (INC) in 1919 from Amritsar and the second time in Calcutta in 1928.
• The massacre of hundreds of Indians by the British at Amritsar in 1919 prompted Motilal to join Mahatma Gandhi’s noncooperation movement, giving up his career in law and changing to a simpler, non-Anglicized style of life.
• In 1921 both he and Jawaharlal Nehru were arrested by the British and jailed for six months.
• In 1923 Motilal helped found the Swaraj Party (1923–27) with Deshbandhu Chittaranjan Das and was also elected to the United Provinces Legislative Council of British India in New Delhi and became the leader of the opposition.
• In 1928 he wrote the Congress Party’s Nehru Report, a future constitution for independent India based on the granting of dominion status. After the British rejected these proposals, Motilal participated in the civil disobedience movement of 1930 that was related to the Salt March, for which he was imprisoned.
• He died soon after release on February 6, 1931 in Lucknow, Uttar Pradesh, due to the deterioration of his health.