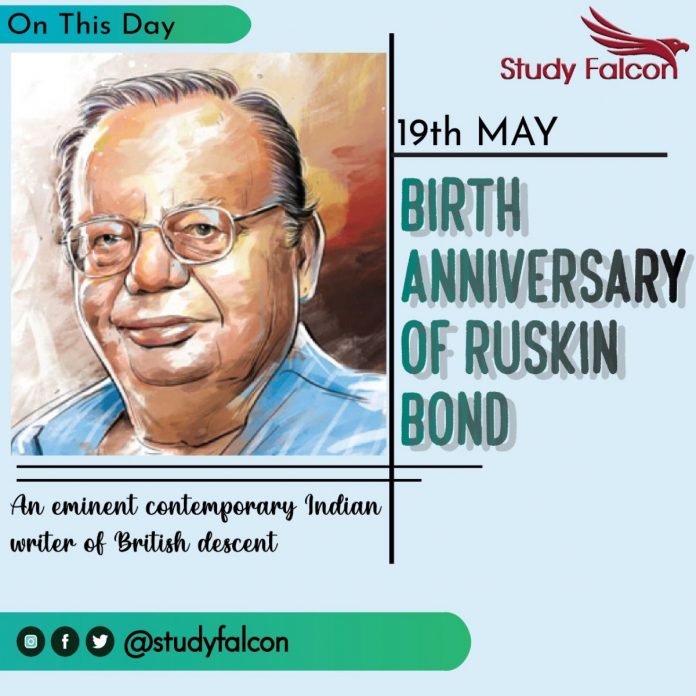 • Ruskin Bond is an eminent contemporary Indian writer of British descent.
• Born on May 19, 1934, in Kasauli, Himachal Pradesh, and grew up in Jamnagar, Dehradun, New Delhi and Shimla, India. He was the son of Edith Clarke and Aubrey Bond.
• Following the sudden demise of his father, he moved to Dehradun where his grandmother raised him. He received his early education from Bishop Cotton School in Shimla.
• At the age of 17 in London, he began to write his first novel, The Room on the Roof. He was awarded John Llewellyn Rhys Memorial prize for his first novel.
• In 2020 he turned 86 on May 19 and to celebrate the occasion, publisher Speaking Tiger has brought out his new book which is about his adventures on boats, trains and planes, called The Trees of Dehra. Originally published on 19th January, 2021.
• The major awards and years Ruskin Bond achieved in his life, 1957 – John Llewellyn Rhys Prize, 1992 – Sahitya Akademi Award, 1999 – Padma Shri, 2014 – Padma Bhushan and 2017 – Lifetime Achievement Award.
• Till now he has written over three hundred short stories, essays and novels and over thirty children’s books.
• Additionally, he penned two autobiographical volumes; Scenes from a Writer’s Life and The Lamp is Lit; Leaves from a Journal.
• The must reads written by Ruskin Bond are The Room on the Roof, The Blue Umbrella, A Flight of Pigeons, Rusty, the Boy from the Hills and A Handful of Nuts.