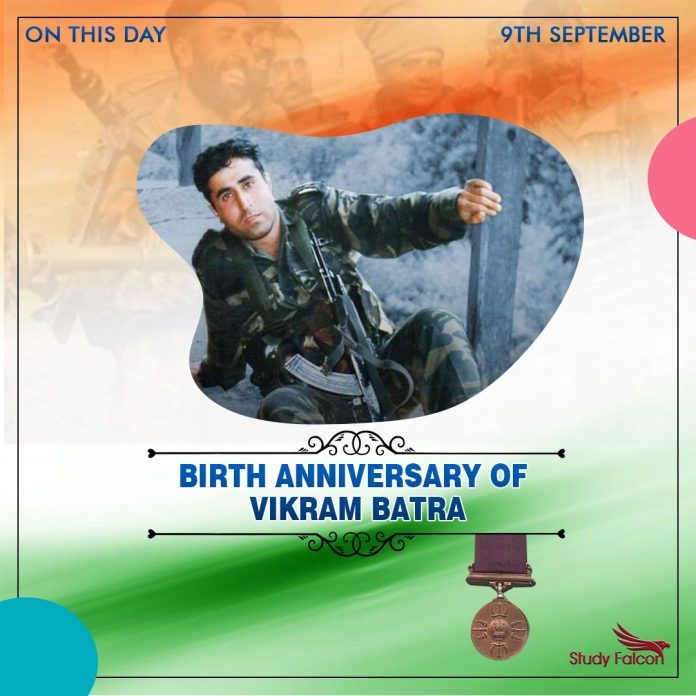 Early Life and Education
Vikram Batra was born on 9th September 1974 in a small town in Palampur, Himachal Pradesh. He excelled at many sports and represented his school and college in table tennis and Karate. He joined the Air Wing of the National Cadet Corps (NCC) and was adjudged as the best NCC Air Wing cadet of Punjab Directorate during the Inter-State NCC Camp.
He was selected and underwent, a 40-day para trooping training with his NCC Air Wing unit at Pinjore Airfield. He afterwards qualified for the ‘C’ certificate in the NCC and attained the rank of Senior Under Officer in his NCC unit. In 1996, he passed the CDS examination and was among the top 35 candidates in the Order of Merit.

Kargil War
On 20th June 1999, during ‘Operation Vijay’, Captain Vikram Batra, Commander Delta Company was tasked to attack Point 5140. Captain Batra with his company skirted around the feature from the East and reached within assaulting distance of the enemy.
On 7 July 1999, in another operation in the area Pt 4875, he assaulted the enemy position and engaged the enemy in a fierce hand-to-hand fight and killed five enemy soldiers.
Despite sustaining grave injuries, he crawled towards the enemy and hurled grenades clearing the position, leading from the front, he rallied his men and achieved a near-impossible military task in the face of heavy enemy fire.
He captured Point 4875 but succumbed to his injuries.

Legacy
Vikram Batra is well known in India for using the slogan, ‘Yeh Dil Maange More’, as his signal to communicate mission success.
The historic capture of Point 4875 by Batra led to the mountain being named ‘Batra Top’ in his honour.
New Delhi’s Mukarba Chowk and its flyover were renamed in honour of Batra in December 2019 as “Shaheed Captain Vikram Batra Chowk.
A war memorial of Batra stands in Chandigarh for his excellent service.