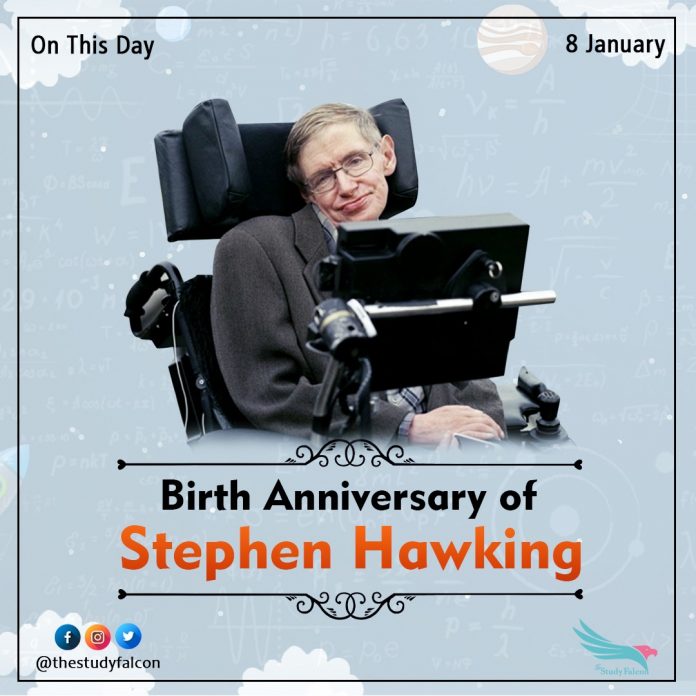 Who was Stephen Hawking?
Stephen William Hawking (8 January 1942 – 14 March 2018) was an English theoretical physicist, cosmologist, and author who, at the time of his death, was director of research at the Centre for Theoretical Cosmology at the University of Cambridge.

Between 1979 and 2009 he was the Lucasian Professor of Mathematics at the University of Cambridge.

Early Life of Stephen Hawking
Hawking was born in Oxford, into a family of physicians. He received a first-class BA degree in physicsat University College, Oxford. In October 1962 he began his graduate work at Trinity Hall, Cambridge. In March 1966 he obtained his PhD degree in applied mathematics and theoretical physics, specialising in general relativity and cosmology.

In 1963, Hawking was diagnosed with an early-onset slow-progressing form of motor neurone disease (amyotrophic lateral sclerosis – ALS) that gradually, over the decades, paralysed him.

Works of Stephen Hawking
Hawking worked primarily in the field of general relativity and particularly on the physics of black holes.

In 1971 he suggested the formation, following the big bang, of numerous objects containing as much as one billion tons of mass but occupying only the space of a proton. These objects, called mini black holes, are unique in that their immense mass and gravity require that they be ruled by the laws of relativity.

In 1974 Hawking proposed that, in accordance with the predictions of quantum theory, black holes emit subatomic particles until they exhaust their energy and finally explode.

Achievements &Legacy of Stephen Hawking
In 1974 the Royal Society elected Hawking one of its youngest fellows. He became professor of gravitational physics at Cambridge in 1977,in 1979 he was appointed to Cambridge’s Lucasian professorship of mathematics, a post once held by Isaac Newton.

Hawking was made a Commander of the Order of the British Empire (CBE) in 1982 and a Companion of Honour in 1989.

He also received the Copley Medal from the Royal Society in 2006 and the U.S. Presidential Medal of Freedom in 2009.