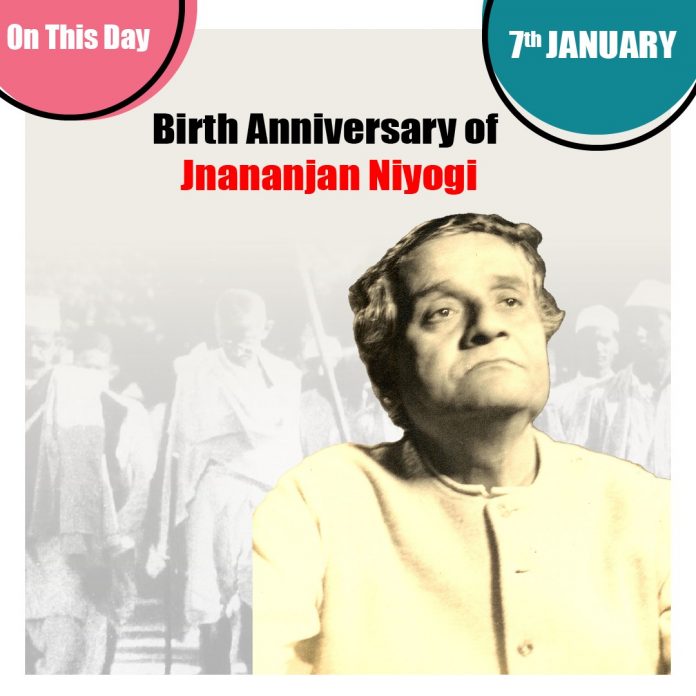 Who was Jnananjan Niyogi?
Jnananjan Niyogi, born at Gaya on 7 January 1891, was actively associated with the Indian independence movement and was a social reformer.

Early Life of Jnananjan Niyogi
Jnananjan Niyogi was born at Gaya on 7 January 1891. He had his early education in Bankipore.
He was in the thick of politics and social reform. He was attracted tothe movement against the partition of Bengal in 1905. He was strongly influenced by Brahmo ideas and tried to implement them in life. He formed a youth organisation named ‘Band of Hope’ and in 1916 hebecome the president of Temperance Federation, a movement against the consumption of alcoholic drinks.

Chittaranjan Das influenced him and he formed the Deshbandhu Pallisanskar Samiti.

The British government banned some of these and he was often jailed for revolting against the king. In 1931, he was lodged in Buxa fort in North Bengal, which was turned into a prison “for dangerous revolutionaries”.

Promotion of Swadeshi goods by Jnananjan Niyogi
He was a leader in the field of the promotion of swadeshi goods. In order to promote the use of indigenous materials, he used to organise Swadeshi Mela during the Durga Puja festivities. He set up a permanent exhibition at Barabazar and opened a sales counter named Swadeshi Bhandar at College Street Market.

At the request of Subhas Chandra Bose, then-Mayor of Kolkata, he set up the Commercial Museum on the first floor of College Street Market and organised a Buy Swadeshi movement. He had set up the Indigenous Manufacturers’ Association. He displayed his organisational capabilities in setting up the Indigenous Manufacturers’ Association.

He established a Salesman Training Institute for this purpose.