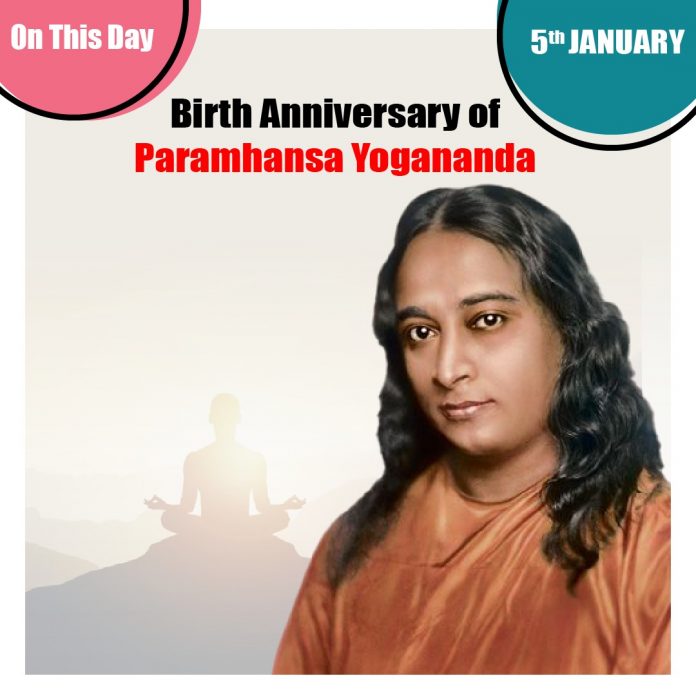 Who was Paramhansa Yogananda?
Paramahansa Yogananda, born Mukunda Lal Ghosh on January 5, 1893 was an Indian Hindu monk, yogi and guru who introduced millions to the teachings of meditation and Kriya Yoga through his organization Self-Realization Fellowship (SRF) / Yogoda Satsanga Society (YSS) of India. He lived his last 32 years in America.

His long-standing influence in the American yoga movement, and especially the yoga culture of Los Angeles, led him to be considered by yoga experts as the “Father of Yoga in the West.”

Early Life of Paramhansa Yogananda
Yogananda was born in Gorakhpur, Uttar Pradesh, India, to a Hindu Bengali Kayastha family.
In 1917, Yogananda founded a school for boys in Dihika, West Bengal, that combined modern educational techniques with yoga training and spiritual ideals. This school would later become the Yogoda Satsanga Society of India.

Teachings of Paramhansa Yogananda
In 1917, in India Yogananda founded a ‘how-to-live’ school for boys, where modern educational methods were combined with yoga training and instruction in spiritual ideals.

In 1920, “he was invited to serve as India’s delegate to an International Congress of Religious Liberals convening in Boston. His discourses taught of the unity of original teachings of Jesus Christ and original Yoga taught by Bhagavan Krishna.’

In 1920, he founded the Self-Realization Fellowship and in 1925 established in Los Angeles, California, USA, the international headquarters for SRF.

Legacy of Paramhansa Yogananda
In 1946, Yogananda published his life story, Autobiography of a Yogi. It has since been translated into 45 languages. In 1999, it was designated one of the “100 Most Important Spiritual Books of the 20th Century” by a panel of spiritual authors convened by Philip Zaleski and Harper Collins publishers.

India released a commemorative stamp in honor of Yogananda in 1977.

On March 7, 2017, the Prime Minister of India, Narendra Modi, released another commemorative postage stamp honoring the 100th anniversary of the Yogoda Satsanga Society of India.