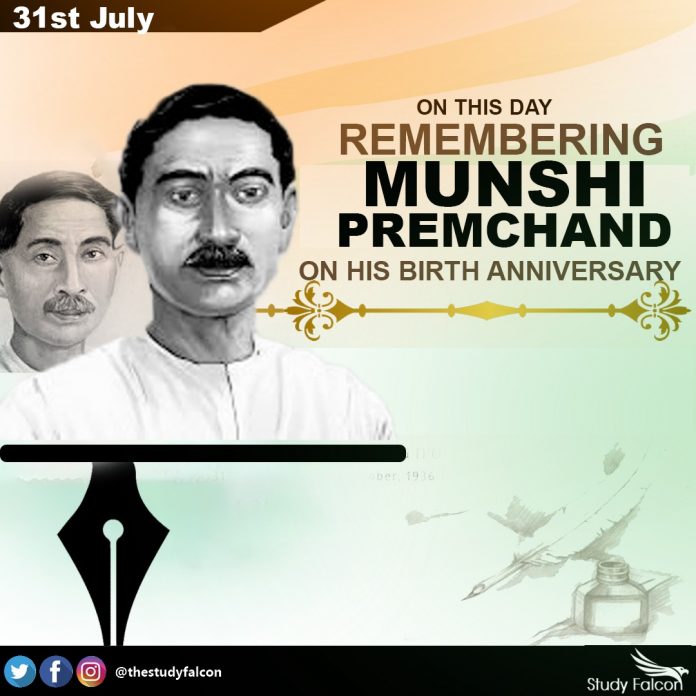 • Dhanpat Rai Srivastava better known by his pen name Munshi Premchand was born on 31 July 1880 in Lamhi, a village located near Varanasi.
• As a child, Dhanpat Rai sought solace in fiction and developed a fascination for books.
• In 1900, Dhanpat Rai secured a job as an assistant teacher at the Government District School, Bahraich, at a monthly salary of ₹ 20.
• Dhanpat Rai’s first short novel was Asrar-e-Ma’abid (“Secrets of God’s abode”, DevasthanRahasya in Hindi), which explores corruption among the temple priests and their sexual exploitation of poor women.
• Dhanpat Rai was relocated to Allahabad for training and there he met Munshi DayaNarain Nigam, the editor of the Urdu magazine Zamana.
• In 1905, inspired by nationalist activism, Premchand published an article on the Indian National Congress leader Gopal Krishna Gokhale in Zamana where he criticised Gokhale’s methods for achieving political freedom.
• Premchand’s first published story was ‘Duniya Ka Sabse Anmol Ratan’.
• Premchand in 1909 was transferred to Hamirpur as a sub deputy inspector of schools.
• In 1914, Munshi Premchand started writing in Hindi and his first Hindi story ‘Saut’ was published in the magazine Saraswati in December 1915.
• In August 1916, Premchand was transferred to Gorakhpur on a promotion. He became the Assistant Master at the Normal High School, Gorakhpur.
• In 1919, Premchand’s first major novel SevaSadan was published in Hindi.
• On 8 February 1921, Premchand attended a meeting in Gorakhpur, where Mahatma Gandhi asked people to resign from government jobs as part of the non-cooperation movement.
• After quitting, Premchand left Gorakhpur for Benares on 18 March 1921 and decided to focus on his literary career.
• In 1923, Premchand established a printing press and publishing house in Benares, named “Saraswati Press”.
• In March 1930, Premchand launched a literary-political weekly magazine titled ‘Hans’, aimed at inspiring the Indians to mobilise against the British rule.
• Premchand was elected as the first president of the Progressive Writer’s Association in Lucknow.
• Premchand died on 8th October 1936 after several days of sickness.
• Premchand was commemorated with the issue of a special 30 Paise postage stamp by India Post on 31 July 1980.
• At least three television series based on Premchand’s works have been aired by the Indian national public broadcaster Doordarshan.