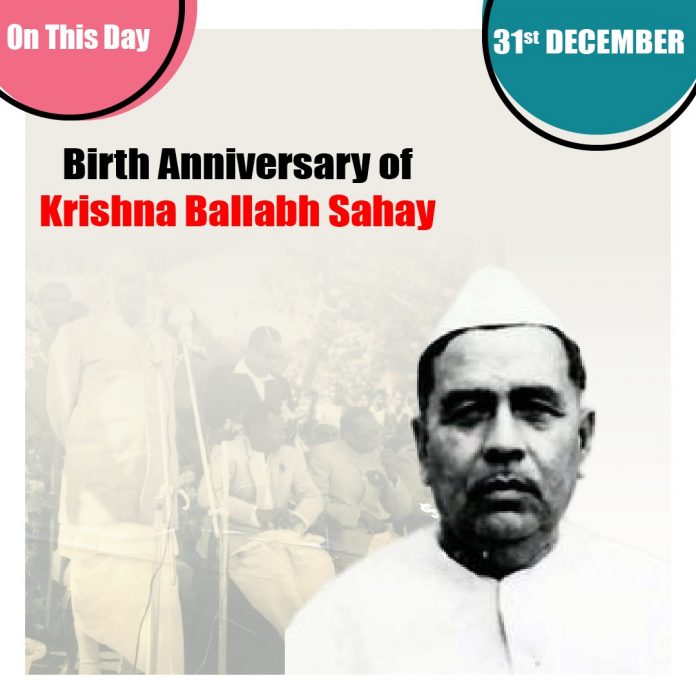 In 1920, Sri Krishna Ballabh Sahay jumped into the fray giving up further studies by joining the Civil Disobedience Movement at the call of Mahatma Gandhi.

Krishna Ballabh Sahay: Independence Movement
Before Quit India Movement in 1942, senior leaders of Bihar including Dr Rajendra Prasad & Dr Anugrah Narayan Sinha visited Bihar to convey the conclusions of the “Vardha Accord” as well as to charter an action plan for Bihar during the Quit India Movement, in an important meeting at Sadaquat Ashram. Sri Krishna Ballabh Sahay was a notable contributor to this plan.

“Quit India Movement” was launched with great fierceness all over India and K B Sahay led the movement at Hazaribagh. The British Government ordered to arrest K B Sahay.

Political Career of Krishna Ballabh Sahay
After independence, when the interim government was formed in Bihar, K.B. Sahay was given the Revenue ministry. K. B. Sahay along with Sri Bajrang Sahay drafted “Abolition of Zamindari” Bill.

He is credited with having authored and passed the first legislation in the country to abolish the Zamindari system.Patna High Court struck down the Act, as did the Supreme Court. It led Jawaharlal Nehru to push the first amendment to the Constitution adding Article 31 (A) and Article 31 (B) to nullify Article 14.

Sahay was the fourth Chief Minister of Bihar in 1963. He lost 1967 elections but won local body elections in 1974 to enter the Bihar Legislative Council as an MLC.