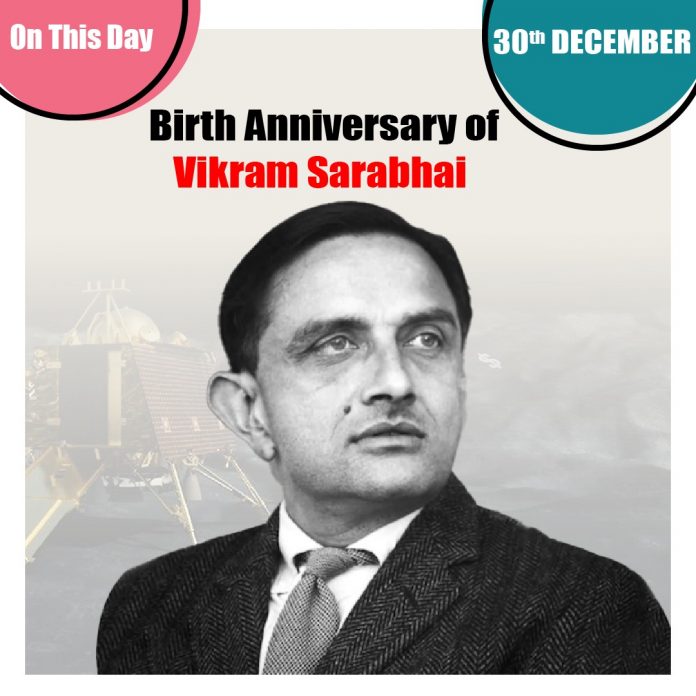 Who was Vikram Sarabhai?
Vikram Ambalal Sarabhai (12 August 1919 – 30 December 1971) was an Indian physicist and astronomer who initiated space research and helped develop nuclear power in India.

Early life of Vikram Sarabhai
Vikram Sarabhai was the son of Ambalal Sarabhai. He came from the famous Sarabhai family from India who were major industrialists committed to the Indian independence movement.

During his lifetime, Vikram Sarabhai practiced Jainism.He attended Gujarat College, Ahmedabad, but later moved to the University of Cambridge, England, where he took his tripos in natural sciences in 1940.In 1945,Vikram Sarabhai returned to Cambridge to pursue PhD and wrote a thesis, “Cosmic Ray Investigations in Tropical Latitudes,” in 1947.

Vikram Sarabhai set up the Operations Research Group (ORG), the first market research organization in the country. Most notable among the many institutes he helped set up are the Nehru Foundation for Development in Ahmedabad, the Indian Institute of Management Ahmedabad (IIMA), the Ahmedabad Textile Industry’s Research Association (ATIRA).

Sarabhai started a project for the fabrication and launch of an Indian satellite. As a result, the first Indian satellite, Aryabhata, was put in orbit in 1975 from a Russian cosmodrome.Vikram Sarabhai was the founder of Indian Space Research Organisation.

Legacy of Vikram Sarabhai
The Vikram Sarabhai Space Centre, (VSSC), which is the Indian Space Research Organization’s lead facility for launch vehicle development located in Thiruvananthapuram (Trivandrum), capital of Kerala state, is named in his memory.